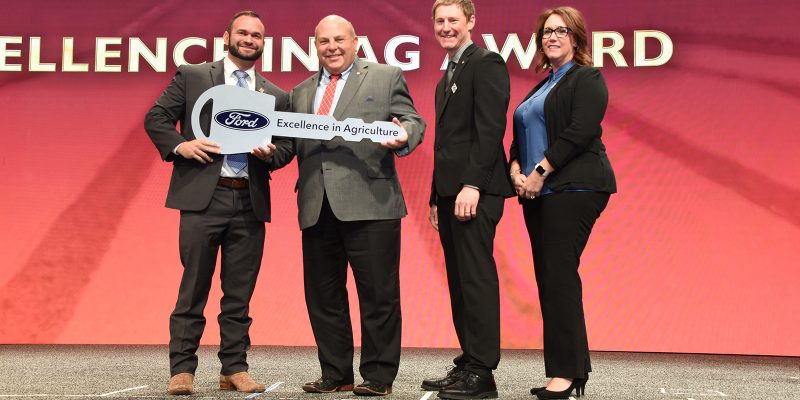 “I am very humbled to receive this award. It is a culmination of the 10 years of activities in agriculture and Farm Bureau. I am very grateful to Nebraska Farm Bureau for taking me in and getting me to this point. This is as much Nebraska Farm Bureau as it is me. It just means the world to me to know there are so many people in Nebraska supporting me,” said Revels.

Revels, a Douglas County Farm Bureau member, was recognized for his ongoing involvement and commitment to agriculture. The Excellence in Agriculture Award recognizes young farmers and ranchers who do not derive the majority of their income from an agricultural operation, but who actively contribute and grow through their involvement in agriculture, leadership ability, and participation in Farm Bureau and other organizations. Revels competed throughout the AFBF Convention against young farmers and ranchers from around the country by demonstrating knowledge, achievement, and commitment to promoting agriculture.

“It’s been a really great opportunity to learn about agriculture in other states, but also highlight some of the cool things we are doing in Nebraska and Douglas County. I am just really grateful to share my experience with Farm Bureau and all the opportunities I’ve been able to have because of Nebraska Farm Bureau,” said Revels.

Revels grew up on his maternal grandfather’s diversified farming operation growing vegetables and raising cattle near Bushnell, Florida. His love for agriculture started at an early age. He was involved in 4-H and FFA and raised replacement dairy heifers, developing his own small herd of registered Brown Swiss dairy cattle. After college, he couldn’t go back to his family’s Florida farm, so he went to work for an animal pharmaceutical company, which led him to the Midwest where he met his wife, Katie. He then began a new career working with dairy farmers to help manage their feed portfolio. He currently is an account manager with Cargill Corn Milling.

Revels also works with an outside technology vendor who helps his customers collect, analyze, and use data in their operations. He manages the relationship between his customers and the vendor, provides support to other staff, and recently started working with the University of Nebraska-Lincoln to translate the data into information that can help farmers make more meaningful decisions on their operations.

Revels will continue to grow his leadership with Farm Bureau and wants to inspire more young people to be a part of Nebraska Farm Bureau. He will also continue to work on policy development, advocating for agriculture, and supporting agricultural education.

Approve
6
Not Sure
0
Disapprove
0
Previous