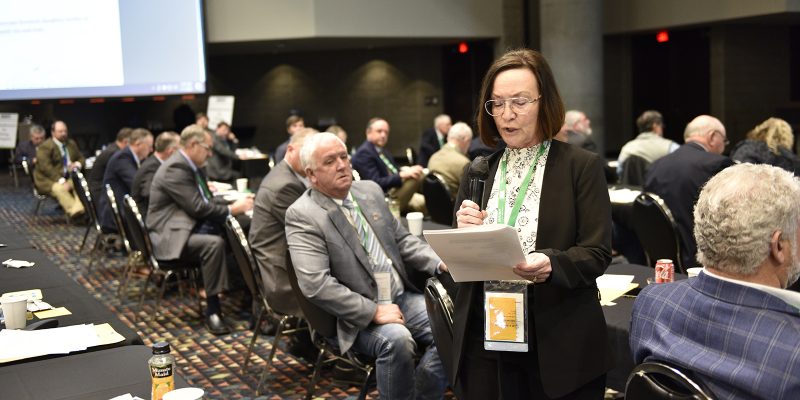 LINCOLN, NEB. – Nebraska delegates at the American Farm Bureau Federation’s (AFBF) Annual Meeting and Convention approved a number of resolutions that will provide the organization with authority from its grassroots members to push Congress toward the goal line on issues like technology, climate markets, and the Farm Bill.

“One of the key issues brought forward by Nebraska Farm Bureau and the delegate body adopted was a policy to support efforts that will help ensure a better ability for machinery and software to exchange information and work with one another when it comes to different brands of agricultural equipment,” Nebraska Farm Bureau (NEFB) President Mark McHargue said.

On the Farm Bill front, delegates laid out some initial policy goals for the upcoming discussion of a new farm bill, including strong support for maintaining and looking at crop insurance products for all commodities. McHargue says new climate markets could also factor into the Farm Bill.

“Farmers and ranchers have a potential new revenue opportunity that continues to grow in the space of climate markets. NEFB policy adopted by the voting delegates supports farmers and ranchers being paid for previously implemented climate smart practices rather than simply receiving funding for new practices. Support was also given to policy that pushes for a larger investment in research and education surrounding the creation of these markets,” McHargue said.

Throughout the session, AFBF delegates set multiple policies reaffirming their strong support for indicating the vital importance of agriculture to the nation and the world.

“We know cybersecurity is a growing concern for farmers and ranchers. That’s why delegates supported policy ensuring all segments of the food supply chain are deemed ‘critical’ and receive adequate funding as our nation continues to work through how to deal with a growing number of cyber-attacks,” McHargue said.

The importance of e-connectivity for farmers, ranchers, and rural communities was also discussed by delegates, with a vote to support raising the standard for federal broadband projects to be at least 100 Mbps for both uploads and downloads.

Another key issue NEFB delegates sought to address at the national convention was transparency in the cattle markets.

“Delegates engaged in robust discussions focused on the need to reform the way cattle are marketed in the United States. Long-standing frustration over imbalances in the meat industry led to the creation of additional policy calling for greater transparency in livestock markets and continued enforcement of the existing Packers and Stockyards Act laws, as well as antitrust laws,” McHargue said.

NEFB was also successful in adding additional policy which supports the building of very small, small, and medium sized meat processing facilities, but also supports controlling the amount of federal assistance available as an effort to promote fiscal responsibility.

Federal disaster programs were also in the forefront of discussion, with delegates adopting policy brought forward by NEFB to add language supporting the creation of a program that covers a gap in disaster assistance.

“The 2019 flooding in Nebraska highlighted a significant coverage gap for hay and forage lost due to excess moisture. While several permeant disaster programs address drought, very little coverage exists to provide emergency assistance for hay and forage in cases of significant flooding or heavy moisture event that damage or even destroy needed livestock feed,” McHargue said.

Nebraska’s farmers have expressed concern for the continued promotion and further development of domestic ethanol and biofuels. Delegates updated policy on biofuels to include renewable diesel. The addition recognizes the innovation and potential that sustainable biofuels play in providing environmental benefits while creating opportunities for America’s farmers.

“Overall, we are extremely pleased to see our Nebraska resolutions make it through the process to help guide our national organization,” McHargue said.