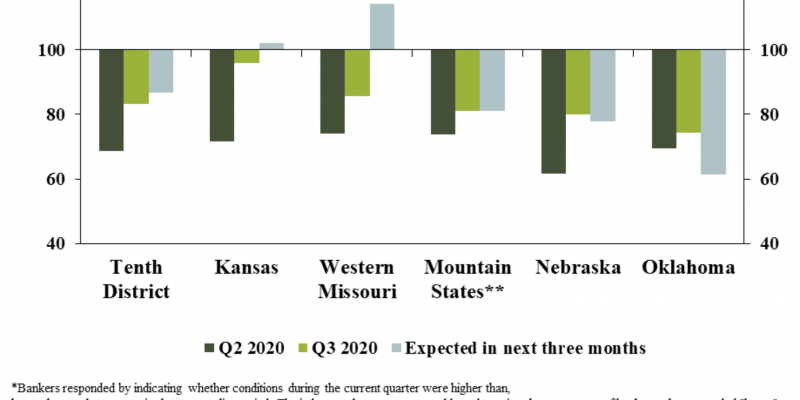 Over the past few years, agricultural operations have taken on more debt, seen working capital decline, and a few operations have fallen behind on loan repayments. The Nebraska Farm Business, Inc. (NFBI) reported the average total debt of its participating members was $1.4 million in 2019, an increase of 40 percent over a 5-year period. NFBI also said one-third of the operations entered 2020 with negative working capital. In other words, the operations did not have enough cash on hand or inventory to sell to pay short-term debts.

The change in income fortunes in 2020 meant key financial indicators either stabilized or declined more slowly compared to previous years. Survey responses by commercial bankers in the Tenth District Federal Reserve Bank in Kansas City (including Nebraska) show the demand for farm loans softened in the third quarter. And, loan repayment rates, while worse compared to the previous year, were not falling as fast as they once were in previous quarters (Figure 1). The loan repayment rate in Nebraska, while less compared to 2019, was expected to finish the year better than rates seen earlier in the year. However, Nebraska’s loan repayment rate is second only to Oklahoma in being the worst in the Tenth District.

Figure 2, also from the Tenth District Federal Reserve Bank, shows the portions of total farm loan portfolios in each state which fell onto watch and classified lists during the third quarter of last year. The watch list are loans which qualify to receive credit but are being closely monitored. The classified list are loans with a defined weakness such as inadequate debt service or insolvent collateral position. Nebraska bankers indicated between 15-20 percent of their farm loan portfolios were on the watch list, about the same as 2019, but the highest share in the Tenth District. The bankers also reported around 3 percent of their loan portfolio was on the classified list, down considerably compared to 2019 when it exceeded 6 percent.

The Financial State of Nebraska Agriculture