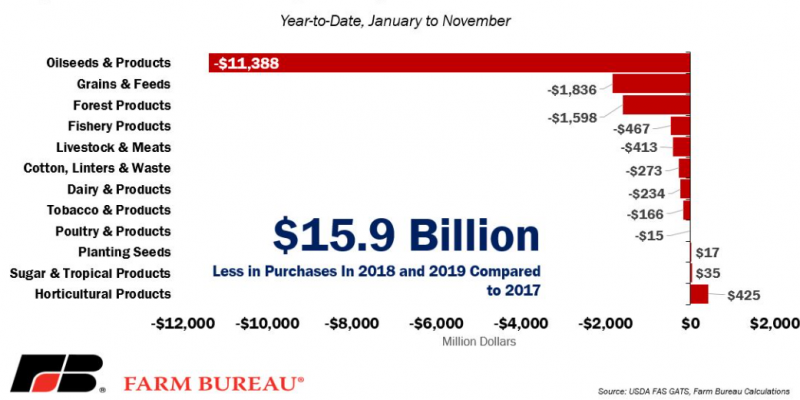 In 2018, after the outbreak of tensions, Chinese purchases fell to $13 billion. Through November of last year, purchases equaled just $12 billion. Figure 1, created by American Farm Bureau (AFBF), shows the change in export value of U.S. goods sold to China in 2018 and 2019. In total, lost U.S. agricultural export sales over the last two years equaled nearly $16 billion compared to 2017.

China has agreed to purchase, on average, $40 billion of U.S. agricultural goods per year, or $80 billion over two years, as part of the deal. The U.S. Trade Representative’s Office (USTR) says that China has also agreed to import in 2020 “no less than $12.5 billion” above 2017 levels, and “no less than $19.5 billion” above 2017 levels in 2021. U.S. agricultural sales to China in 2017 were $19.5 billion. The USTR also says the agreement addresses a “a multitude of non-tariff barriers to U.S. agriculture and seafood products” imposed by China. For example, according to the USTR, China will eliminate age restrictions on cattle slaughtered for export to China and recognize the U.S. beef traceability system. It has also agreed to implement a transparent and risk-based regulatory process for the evaluation and authorization of agricultural biotechnology.

The agreement, then, should mean a return to levels of trade seen prior to the dispute, plus some. The uncertainty revolves around whether the purchase amounts outlined in the agreement can be met. And, if so, which commodities will experience the increased sales. There are many reasons for the uncertainty. First, the agreement does not remove the retaliatory tariffs on U.S. agricultural exports to China. Second, the world did not sit still over the past two years while the U.S. and China fought. Other suppliers made inroads into the Chinese market. Figure 2, created by AFBF, shows importers market share in China since 2014. Prior to 2018, U.S. market share in China ranged between 19-24 percent. In 2018, it fell to 12 percent. Competitors to the U.S. will not willingly give up market share, meaning U.S. exporters will have to work hard to reestablish themselves in the market. Finally, U.S. agricultural exports to China have never come close to $40 billion.

All that being said, friendlier trade relations with China does provide potential for increased sales of several Nebraska-produced commodities. Figure 3, also created by AFBF, shows a breakdown of China’s agricultural imports in 2018. Though Chinese soybean imports were blunted by the outbreak of African Swine Fever (ASF), they continue to be China’s largest imported good which should benefit Nebraska soybean producers. The outbreak of ASF also provides potential markets for livestock producers. China needs to import meat protein to offset the loss of its pork production. This could especially benefit Nebraska beef and pork producers. And, dairy producers could benefit as China imports significant amounts of dairy products. However, it should be noted though, that any increases in exports to China might result in a slippage in exports to the rest of the world as competitors look to make up lost sales.

The Phase One deal is a positive for Nebraska agriculture. It stops the escalation of the trade dispute between China and the U.S. over the past two years. It re-establishes access to a large and growing market for U.S. producers. And, it addresses several non-tariff barriers which U.S. products confronted in China. President Trump said U.S. farmers should “buy larger tractors” as a result of the deal. The deal should lead to increased agricultural trade for U.S. producers, but it’s probably best left to farmers and ranchers to determine whether they will need to buy larger tractors. To see AFBF economist Veronica Nigh’s analysis of the deal, go to: https://www.fb.org/market-intel/china-what-does-it-mean-now.