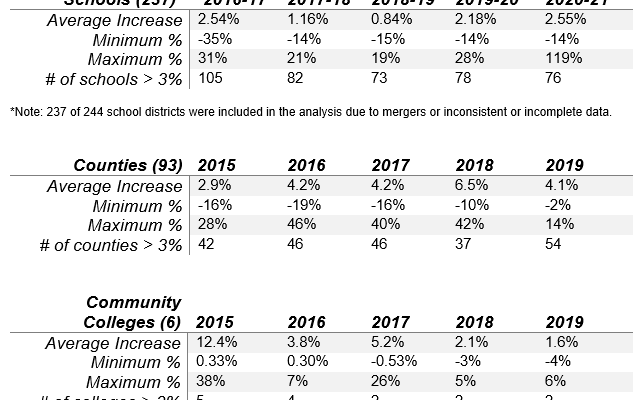 Two measures have been introduced in this year’s Legislature, both on behalf of Governor Ricketts, to limit the growth in property taxes levied by local governments to 3 percent annually. The measures, LR 22CA introduced by Sen. Lou Ann Linehan, and LB 408 introduced by Sen. Tom Briese, differ only in that Linehan’s measure would place the limit in the state constitution.

The limit would apply to taxes levied by schools, counties, cities and villages, natural resources districts, educational service districts, community colleges, and sanitary and improvement districts. Taxes levied for bond repayments and due to new growth (improvements) are excluded from the limit.

It’s difficult to know how a tax limit might affect local government property taxes in the future, but one can gain some insight from examining how the limit might have impacted taxes in the past. Table 2 shows the recent history in taxes levied by schools, counties, and community colleges. These three types of subdivisions types typically account for 80 percent of the taxes levied on agricultural land. The information in Table 2 is based on Farm Bureau calculations using data from the Department of Education and the Department of Revenue.

For each subdivision type, the table shows the average annual increases in taxes over the past five years, the minimum and maximum percentage changes each year, and the number of entities which would have exceeded the 3 percent limit. For example, in 2016 the average increase in taxes across all counties was 4.2 percent, the minimum percentage change among counties was -19 percent (a 19 percent reduction in taxes), the maximum increase was 46 percent, and 46 counties exceeded the 3 percent limit. For purposes of the analysis, taxes levied for bond repayments are excluded, but the taxes levied due to new growth are not. Thus, the percentage changes are overstated somewhat.

A couple things stand out in looking at the numbers. First, taxes levied by schools have increased less than those levied by counties or community colleges. So, a 3 percent limit is more likely to affect counties and community colleges than schools. Second, there is a wide variation of tax changes among local governments from year-to-year. For example, for counties, changes in taxes ranged from declines of nearly 20 percent to increases exceeding 40 percent. Thus, a 3 percent limit will impact local subdivisions differently depending on their unique situation.