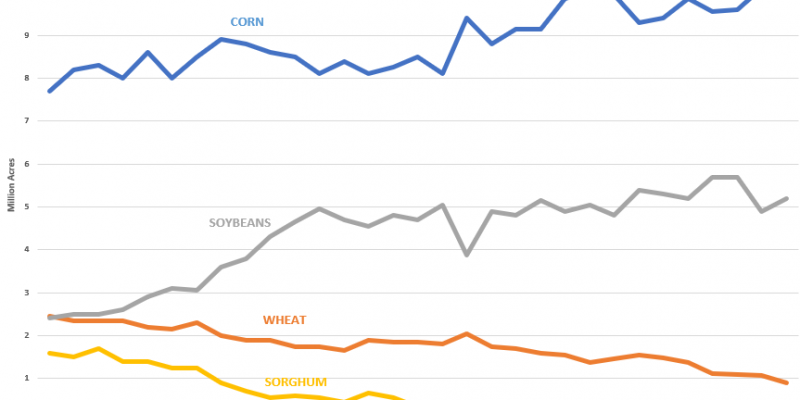 A story in Tidbits late last year explored the acres devoted to field crops in Nebraska since 1993. Most people, if asked, would probably say acres devoted to crops in the state have increased over time. An understandable response given the expansion of ethanol production and growing exports since the turn of the century.

The reality though is different. Acres planted to crops last year exceeded those cropped in 1993 by only 2.8 percent. Remarkably, this calculates to an average annual percentage change in acres cropped over the 28-year period of 0.01 percent, or 19,000 acres each year.

While total planted acres have remained fairly stable, the cropping mix hasn’t. Acres planted to Nebraska’s four largest crops—corn, soybeans, grain sorghum, and wheat—are shown in Figure 1. These four crops typically account for 85 percent of the planted acreage. Several trends can be seen in Figure 1. First, corn remains permanently ensconced as the state’s pre-eminent crop. Prior to 2007, acres in corn remained between 8 to 9 million acres. In 2007, acres rocketed by 1.3 million acres in one year to exceed 9 million. By 2012, corn acres had grown to 10 million, a level exceeded again in both 2019 and 2020. Surging prices due to growth in ethanol production and healthy exports fueled the expansion in acres.

Second, 30 years ago, acres in wheat and soybeans were largely the same. Round-up ready soybeans entered the market in the middle 1990s and planted acres to soybeans grew dramatically. Soybean acres increased almost 2 million acres between 1997 and 2001. Farmers responded quickly to the cost savings and increased productivity of these genetically modified seed technologies. Since then, acres in soybeans have fluctuated around 5 million, reaching a high of 5.7 million in 2017 and 2018.

Third, corn and soybeans growing dominance in the cropping mix over the past 25-30 years has largely come at the expense of acres planted to wheat and sorghum. Acres planted to wheat and sorghum in 2020 were 73 percent less than that planted in 1990. Technology and market forces both played roles in the shift. Improved seed technologies for corn and soybeans improved their profitability relative to other crops, particularly grain sorghum. Market conditions—the growing use of corn for ethanol, China’s purchases of soybeans, and increased world competion in wheat production—also provided incentives for farmers to plant corn and soybeans.

Message from the Editor