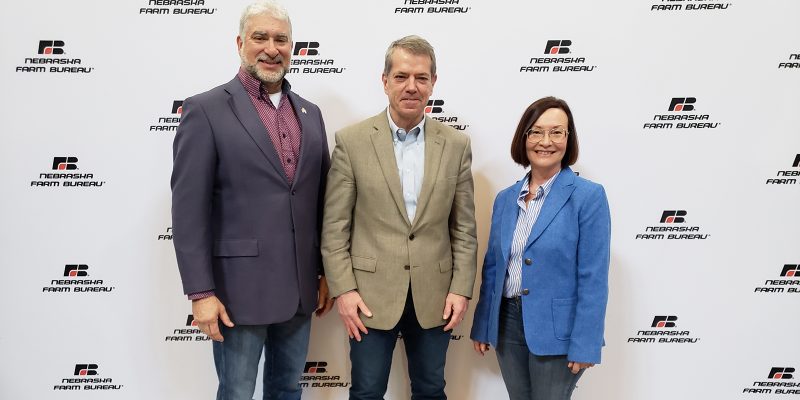 “Through our process, it was clear that our members believe Jim Pillen is the right person to lead our state into the future. We are proud to offer him our endorsement and support as he seeks the Republican gubernatorial nomination,” said Vinton.

“I’m honored to have the support of the Nebraska Farm Bureau and the thousands of farming and ranching families it serves. We share the same vision for Nebraska’s future—one of growth and prosperity fueled by our world-class ag producers. I look forward to working with the Nebraska Farm Bureau to fix our broken tax code, strengthen our communities, grow our economy, preserve our family values, and make sure Nebraska farmers and ranchers can always be successful. When Nebraska farmers do well, all Nebraskans do better,” said Jim Pillen upon receiving the endorsement.

“People tend to evaluate candidates based on who they are and what they stand for. Jim Pillen’s Nebraska roots run deep. He comes from agriculture. He’s built a successful family business here in our state. He understands the importance of strong communities. He brings public service experience to the table, serving on the UNL Board of Regents. He’s fiscally conservative, and people believe he’ll bring a commonsense approach to addressing key issues and leading our state,” said McHargue.

McHargue also noted that many of Pillen’s priorities align with those of importance to Nebraska’s farm and ranch families.

“The next Nebraska governor will have major issues to tackle. They’ll need to address tax and school funding reform. Jim supports education and is committed to fixing our broken tax system that’s relies far too heavily on property taxes. The next governor will need to continue to work to grow our state. That means working to ensure high-speed and high-quality internet service is available across Nebraska. Jim has made that a priority. It also means expanding markets for our Nebraska agricultural products, whether that’s supporting the development of businesses that add value to our products here in Nebraska or moving our products into international markets. Jim’s committed to helping our state and agriculture grow,” said McHargue. “We look forward to supporting Jim Pillen as he seeks the Republican gubernatorial nomination.”

Approve
11
Not Sure
0
Disapprove
9
Previous

Nebraska Agriculture in the Classroom Teacher of the Year