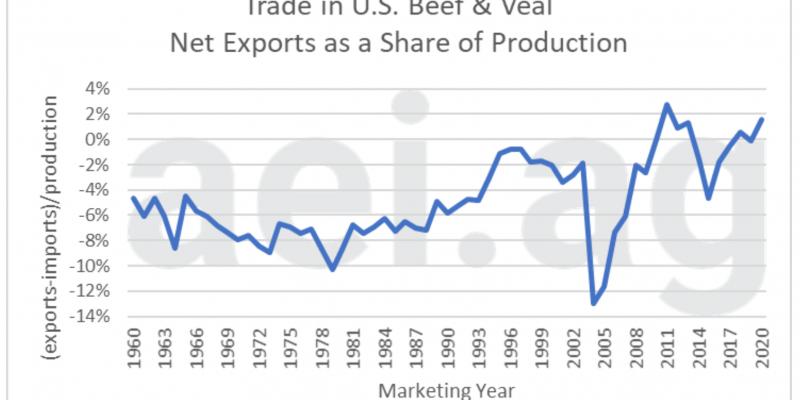 Too often the focus when looking at trade is on the latest data and most recent happenings. Sometimes though, it’s good to step back, look at the long-term, and see if any trends emerge.

A recent Ag Economic Insights blog post by David Widmar did just that, examining U.S. beef trade over the past 60 years. Nebraska, as the nation’s largest beef exporting state since 2011, should have a keen interest in any long-term beef trade trends.

U.S. net exports of beef prior to 1993 were negative, meaning the U.S. typically imported more beef than it exported. Starting in the early-1990s, net exports, though still negative, started trending higher. It was during this period the U.S. entered into trade agreements like NAFTA and others which helped grow U.S. beef exports. Net exports plummeted in 2004 after the December 2003 BSE case, but then started growing again turning positive in 2010. In 2011, net exports reached 3 percent of production, a high. Since then, net exports have vacillated, retreating then turning higher. In 2018, the U.S. again exported more beef than it imported and for 2020 the USDA estimates net exports will equal 2 percent of production.

The line in Figure 1 has an upward slope since the late 1970s. Thus, Widmar concludes that over the last three decades a shift towards more U.S. beef exports has been underway. Part of the reason for this growth is global economic growth and friendly trade relations. For beef states like Nebraska, the trend is a positive and if the underlying condition persist will hopefully result in greater beef exports in the future.

Figure 1. Net Exports of U.S. Beef as a Share of Productions