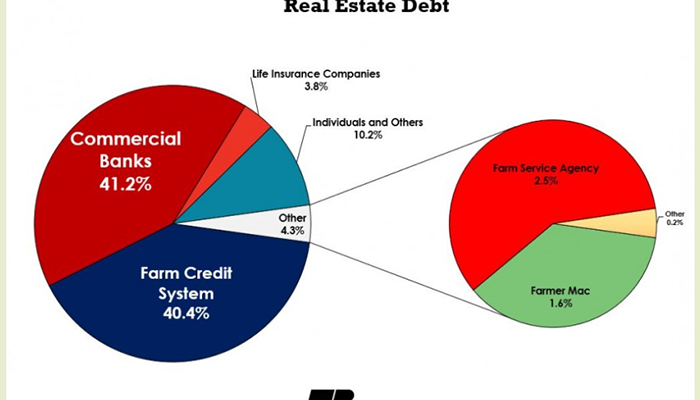 U.S. farm sector debt is growing and is projected to hit a record-high of $409.5 billion in 2018, up 4.2 percent from 2017. Real-estate debt in 2018 is projected at $250.9 billion, and non-real estate debt is projected at $158.6 billion, both record highs. Dr. John Newton, Chief Economist for American Farm Bureau, recently examined farm sector debt figures, who holds the debt, and how that has changed in an AFBF Market Intel piece. It can be found at: https://www.fb.org/market-intel/.

Figure 5 shows how the holders of farm debt have evolved over time. In 1960, individuals were the largest creditors of farm debt, commercial banks held just over 25 percent, and the Farm Credit system held around15 percent. Over the last nearly 60 years, farm debt held by individual creditors has dwindled to around 10 percent, that held by commercial banks has grown to 41 percent, and the amount held by Farm Credit has grown to 40 percent. The Farm Service Agency saw a significant increase in farm debt held in the middles 1980s, amid the farm crisis, but has since dropped back to roughly 2.5 percent of the debt.