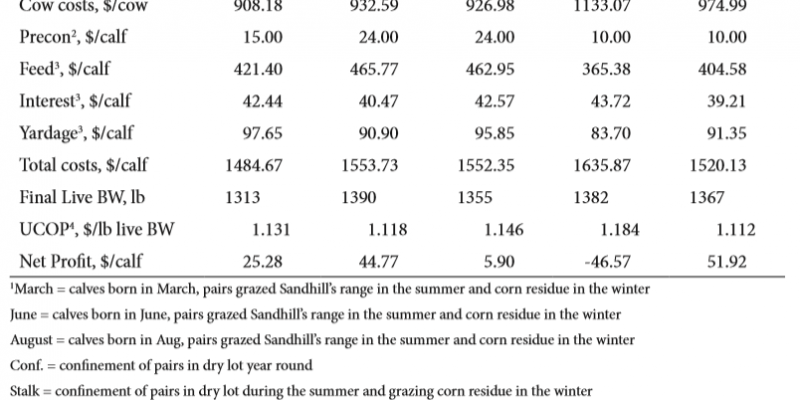 An economic analysis of five complete beef production systems conducted by researchers at the University of Nebraska found calves born in June netted the greatest profit per calf (Table 2). The researchers attributed the greater profit for June-born calves to “greater age at weaning resulting in heavier weights into the feedyard.” The researchers also found that a semi-confined system, one with confinement of pairs in a dry lot during the summer and grazing corn in the winter can be competitive with pasture-based systems, but a year-round confinement system is not competitive with other systems.

The economic analysis was based on research performed at the Gudmundsen Ranch in the Sandhills and the Eastern Nebraska Research and Development Center. Beef systems analyzed included three pasture-based systems where cows calved in March, June, or August. The March-born calves were weaned in October, and the June and August-born calves were weaned in April. The other two systems analyzed were confinement-based: one where cows were fed in confinement year-round and the other where cows were in confinement during the summer and grazed corn residue in the winter. In these systems, calves were born in July and weaned in April.

The researchers concluded, “These analyses suggest that the use of grazed corn residue has the potential to increase net returns in beef systems, especially in intense corn producing areas of the state. The complete system analysis suggests delayed weaning while pairs grazed corn residue enhances net income because the feed steers weighed more at harvest.” To read the report, go to: https://beef.unl.edu/documents/2019-beef-report/MP106_pg007_Klopfenstein_et_al.pdf.