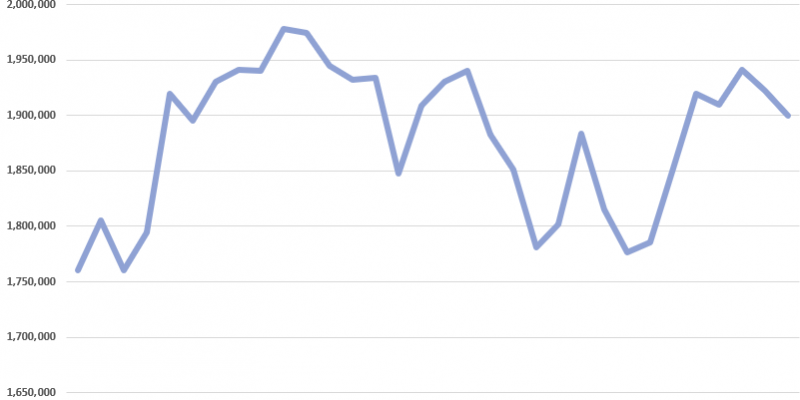 Beef cows which calved totaled 1.90 million head in Nebraska on Jan. 1, down 1 percent compared to 2020 according to USDA National Agricultural Statistics Service (Figure 2). Nebraska remains fourth among states in the number of beef cows following Texas, Oklahoma, and Missouri.

This year marks the second consecutive year of decline in the number of cows in the state. However, cow numbers are still much higher than they were in 2014 and 2015 when they dipped below 1.8 million. Nebraska’s cow herd will generally fall between 1.8-1.95 million head, so this year’s inventory is still in the upper half of the range. Replacement heifers on Jan. 1 numbered 350,000 head, down 20,000 from last year. The decline in beef cows and replacement heifers would suggest the 2021 calf crop in Nebraska will be down this year. Last year’s calf crop was 1.75 million, off 2 percent compared to 2019.

Nationwide, the beef cow herd totaled 31.16 million head, down 0.6 percent, the first decline in the herd in five years. However, replacement heifers were up a bit compared to last year. According to AFBF economist Michael Nepveux, analysts were expecting fewer heifers to be held back for replacement. Calves born last year were down 1 percent from 2019 which Nepveux suggests could limit fed cattle supplies in the future and be supportive of cattle prices down the road (https://www.fb.org/market-intel/january-cattle-inventory-and-cattle-on-feed-reports).

What Could 2021 Hold for Your Operation?