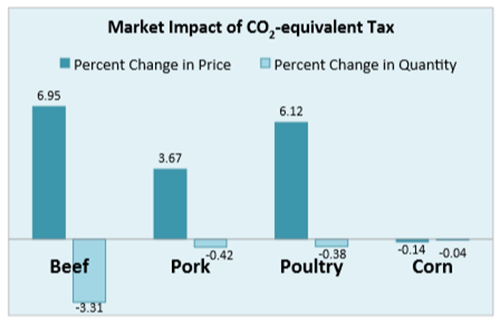 Climate change and greenhouse gas (GHG) emissions are increasingly capturing the media and public’s attention. Last week’s release by congressional Democrats of a “Green New Deal”, a 10-year plan to reduce net greenhouse gas emissions in the United States to zero, is the latest evidence of the growing attention paid. A carbon tax is often suggested as a means to reduce GHG emissions by taxing industries and activities which are large emitters. Some people have even suggested a carbon equivalent tax on meat consumption arguing it will reduce the demand for meat and consequently reduce livestock CHG emissions. Clearly such a tax would affect Nebraska’s livestock sectors.

Regan Gilmore, a student at the University of Nebraska-Lincoln, examined the impacts of a carbon equivalent meat tax on meat and corn markets. The research was part of an Undergraduate Creative Activities & Research Experiences (UCARE) research project under the guidance of Dr. Azzendine Azzam of the Department of Agricultural Economics. Gilmore used an economic model of grain and livestock markets and estimated meat tax rates generated in a prior study based on the carbon emissions to analyze the tax impacts on prices and quantities of beef, pork, poultry, and corn. The estimated carbon equivalent meat taxes in the analysis equaled 13 percent on beef, 4 percent on pork, and 7.5 percent on poultry.

Gilmore’s findings are shown in the chart below. The price increases due to the meat tax result in less quantity demanded across all three meats, with beef showing the greatest impact. Retail prices for beef would increase almost 7 percent, while those for poultry would increase just over 6 percent. Gilmore also estimated a meat tax would reduce GHG emissions by 11 million tons, or 0.17 percent of the total U.S. emissions in a year.

The changes in the meat and commodity markets described by Gilmore would negatively impact Nebraska livestock and corn producers, but consumers would also be impacted. According to Jayson Lusk, an agricultural economist at Purdue University, data from the Bureau of Labor Statistics show consumers spent $181 billion in 2017 on animal products eaten at home. And this doesn’t account for animal products eaten outside the home—43.5 percent of all food spending occurs outside the home. Consumers value meat protein in their diets. There is also a value to society of reducing U.S. GHG emissions. The question from an economic standpoint is whether the benefits of GHG emissions reduction offset the negative impacts to producer and consumer welfare resulting from a carbon equivalent meat tax. Plus, there’s the generational nature of the impacts—the benefits of emissions reductions will accrue in the future while the tax impacts are born by producers and consumers in the present. As with many policy issues surrounding climate change, much more research on the tradeoffs is needed.

Nebraska Leads Nation in Use of Drought-Tolerant Hybrids