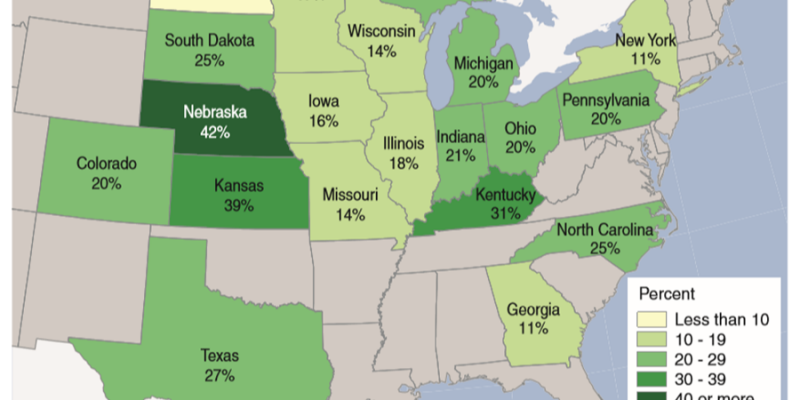 Nebraska is drought-prone. Nebraska farmers and ranchers do not need to be reminded of this fact. Now, a report by the USDA Economic Research Service shows Nebraska corn producers lead the nation is adopting new technology to combat drought. According to the report, Nebraska corn producers led the nation in the use of drought tolerant (DT) hybrids in 2016 (Figure 3), 42 percent of Nebraska’s corn acres that year were planted with DT hybrids. Kansas producers were next, planting 39 percent of their corn acres with DT seeds. The figures come from the 2016 Agricultural Resource Management Survey (ARMS) which is an annual survey of farms’ production practices, financial characteristics, and demographics.

Not surprisingly, states with semi-arid climates, more prone to drought, like Nebraska and Kansas reported the highest adoption rate of DT hybrids. No doubt the pay-off to Nebraska and Kansas farmers, particularly dryland farmers, from DT hybrids is greater than in other corn-producing states where drought is less prevalent.