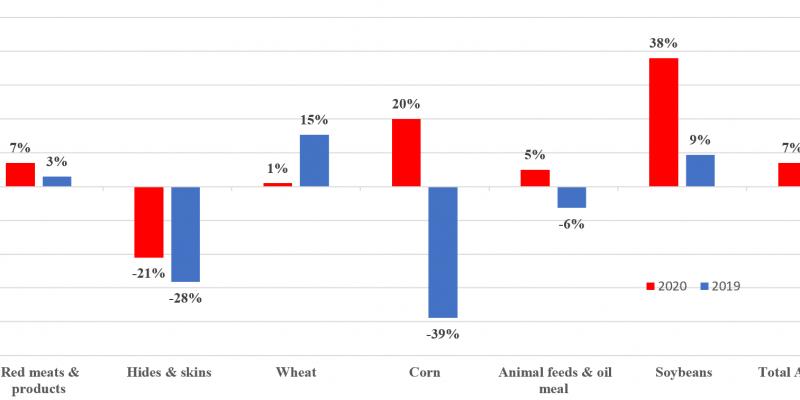 Exports got the hits U.S agriculture needed in the bottom of the ninth inning last year to capture a trade surplus for the 61st consecutive year. Through September of last year, U.S. agriculture was running a trade deficit with the rest-of-the-world of $2.0 billion. Exports were off 0.78 percent and imports were up 2.3 percent. However, a fourth quarter export surge provided the base clearing hit to close out another trade surplus equal to $9.8 billion, up from the $5.7 billion in 2019. The last time the U.S. had a trade deficit in agricultural goods was 1959, the year Alaska and Hawaii were admitted as states to the union.

Total agricultural exports equaled $145.7 billion in 2020, up 7 percent compared to 2019 according to the USDA Economic Research Service. Imports equaled $135.9 billion, up 4 percent. Exports of soybeans, up 38 percent to $25.7 billion, and corn, up 20 percent at $9.2 billion, had the largest gains for Nebraska produced commodities (Figure 1). Corn and soybeans typically are among Nebraska’s top three export commodities. Beef exports, the other major export from Nebraska, equaled $7.7 billion last year, down $446 million from 2019. Exports of U.S. pork were up 9.9 percent. Chinese purchases of soybeans, corn, pork, and sorghum in the fourth quarter were responsible for the late year rally. Chinese imports of U.S. agricultural goods reached $27.2 billion, up 30 percent from 2019, and the largest on record (Figure 2). However, China fell short of the targets it agreed to in the Phase 1 agreement, $33.4 billion.

Joe Dimaggio’s hitting streak lasted 56 games. Cal Ripken’s consecutive games played streak lasted 2,632 games. The U.S. agricultural goods trade surplus continues for a 61st year. Exports continue to deliver the hits in the early innings of 2021, so prolonging the trade surplus for a 62nd year is off to a good start.