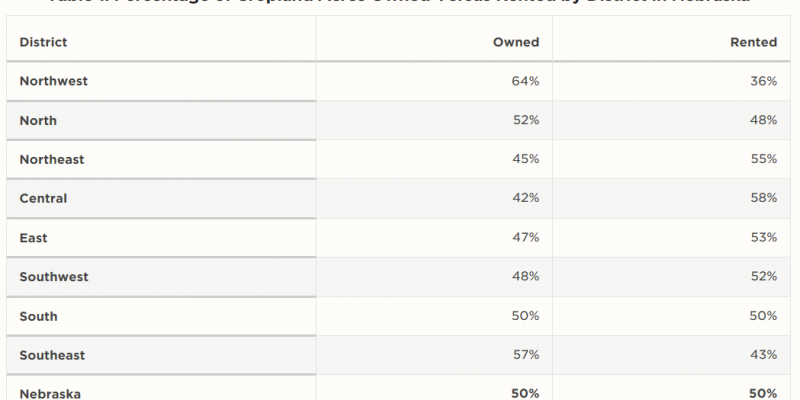 The Department of Agricultural Economics at the University of Nebraska was part of a 2016 survey of farmers and livestock producers in Nebraska concerning their financial health. As part of the survey, producers were asked questions on whether the agricultural land in their operations was owned, cash rented, or share leased during the prior five years. Table 1 shows the survey results for the percentage of land owned and rented in eight regional districts and the state in total. Statewide, 50 percent of the cropland was owned, and 50 percent rented. The Northwest District had the highest percentage of land owned, 64 percent, while the Central District had the lowest percentage, 42 percent.

Figure 1 shows the breakdown between cash rent and share rent. Statewide, roughly 60 percent of the land not owned is cash rented. It’s interesting to note the differences in leasing across the northern portion of the state. The Northeast and North regions are dominated by cash leases, while the Northwest region is dominated by crop share leases. Otherwise, the South district is the only other area of the state where share leases surpass 50 percent of the leases. For more information on the survey results, go to https://agecon.unl.edu/cornhusker-economics/2019/trends-nebraska-agricultural-land-ownership-rental-patterns.

Nebraska Farm Bankruptcies on the Rise in 2018