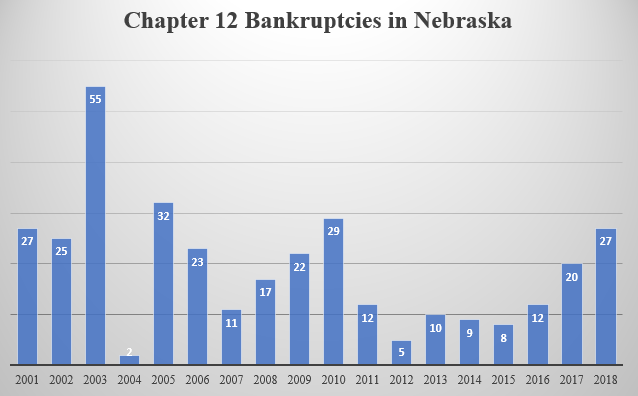 The increase in bankruptcy filings in Nebraska ran counter to the decrease in filings experienced nationwide. Bankruptcies filed nationwide were down 3 filings from 2017, 498 verses 501. Nationwide filings were also slightly below the 10-year average, 504 filings per year. But, the overall nationwide experience belies regional differences. Figure 4 maps the percentage changes in bankruptcies by region filed between 2017 and 2018 compiled by John Newton, economist at American Farm Bureau. Bankruptcies in the Midwest, which includes Nebraska, were up 19 percent last year and double what they were in 2008. Of the six regional state groupings, four regions saw increases in farm bankruptcies while 2 regions, the Southeast and Pacific experienced declines. For the Midwest region, Newton attributes the increase in bankruptcies to declining cash receipts for dairy, wheat, and corn which are prominent in this region.

Is Industrial Hemp in Nebraska’s Future?