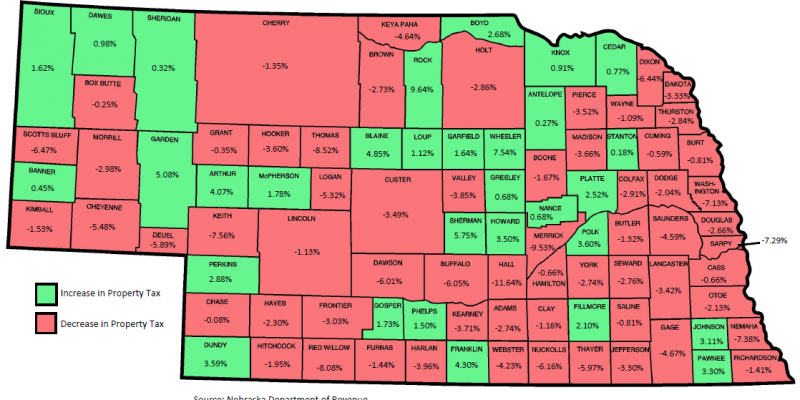 Taxes levied on agricultural machinery and equipment were also off 1.5 percent. In comparison, taxes on residential property were up 6 percent and those levied on commercial real property were up 6.5 percent. Since 2010, taxes on agricultural land have risen 82 percent, 1.82 times the growth in taxes on residential property (45 percent). It should be noted taxes levied do not account for credits through the property tax credit program or the income tax credit for property taxes paid to schools.

Figure 1 shows percentage changes in property taxes levied on agricultural land in counties between 2019 and 2020. The good news: roughly two-thirds of the counties saw declines in taxes in 2020 compared to 2019. Counties with the largest declines included Merrick (-9.5 percent), Red Willow (-8.0 percent), and Keith (-7.5 percent). Declines in land values contributed to lower taxes in these counties. The bad news: 31 counties saw increases in taxes. Wheeler County (+7.5 percent) and Garden County (+5.0 percent) saw the largest increases. Counties with increases were largely clustered in the north central and northwestern regions. The increases were largely due to increases in the value of land.