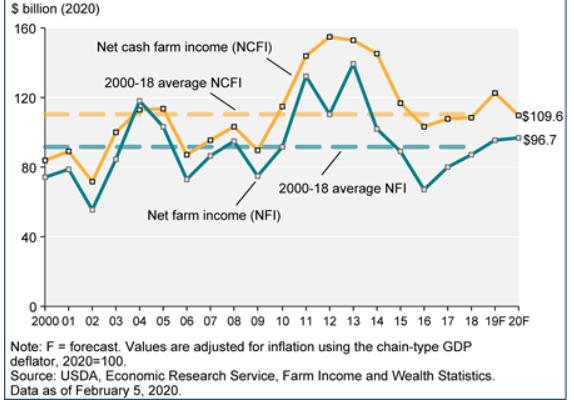 The USDA’s most recent forecast of net farm income in 2020 pegs it at $96.7 billion, up 3.3 percent or $3.1 billion, from last year. If realized, 2020 would represent the fourth consecutive year of improved farm income. However, according to American Farm Bureau, 2020 farm income would only be slightly higher than the 20-year, inflation-adjusted, national average of $93 billion.

The farm income forecasts offer positive news for Nebraska. Higher cattle/calves receipts are particularly positive as Nebraska is second only to Texas in the number of beef cattle. Poultry receipts in Nebraska should also be higher due to the ramp up of production at the Costco facility in Fremont. On the crop side, typical production levels with steady prices could be coupled with lower per bushel costs.

The USDA projections do not include any growth in exports to China due to the Phase 1 deal. If China ramps up purchases of U.S. agricultural goods, a big “if” given the uncertainties created by the coronavirus outbreak and its accompanying economic impacts, the farm income numbers could improve. Another uncertainty is federal support payments. As noted above, the income projections do not include any MFP payments this year. With the Phase 1 agreement and passage of a new trade agreement with Canada and Mexico, most people thought a MFP program this year was unlikely. However, a President Trump tweet on Friday said additional aid to farmers will be provided until the trade deals “fully kick in.” Either way, more exports to China or additional MFP payments should improve income conditions on the farm or ranch.

Per Bushel Costs Lower in 2020