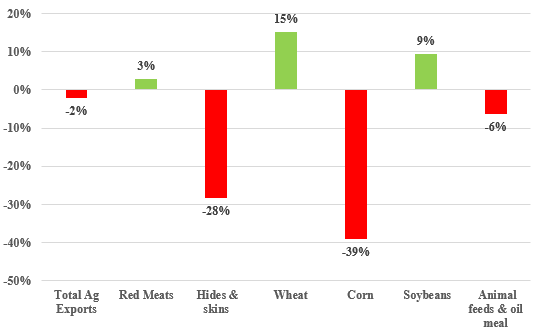 U.S exports of agricultural commodities of $137 billion in 2019, lagged exports in 2018 by 2 percent. Exports of Nebraska produced commodities showed mixed results, with red meat, wheat, and soybean exports higher last year compared to 2018, and corn, animal feeds (ddgs.) and hides and skins lagging. Figure 1 shows the percentage changes in U.S. export value of these commodities in 2019 compared to 2018.

A bright spot last year for exports of importance to Nebraska were red meats—pork and beef. Red meat exports were up 3 percent, holding their own compared to the previous year, an excellent result considering the competition issues facing U.S. meat exports last year. U.S. meat products were at a competitive disadvantage in several southeast Asian markets because the U.S. was not a participant in the Comprehensive and Progressive Trans-Pacific Partnership (CPTPP). The competitive issues were most apparent in beef exports which declined almost 140 million pounds compared to 2018. Pork exports, though, more than compensated the fall in beef exports, increasing 445 million pounds compared to the prior year, 7 percent higher when compared to 2018. Growing demand in South Korea and China were driving the larger overseas pork purchases.

Wheat was another star among Nebraska commodities with the value of U.S. exports up 15 percent. Production concerns in other parts of the world and a growing world demand helped boost exports. Additionally, the value of soybean exports were up 9 percent. Last year’s improvement is a rebound from the decline of 20 percent in 2018.

Exports of other major Nebraska commodities did not fare as well. Exports of hides and skins, important to Nebraska because of the packing industry, were 28 percent less than 2018. China is the largest purchaser of U.S. hides and skins and its purchases were down due to the trade dispute and competition from alternatives. Sales of corn last year were down 39 percent compared to 2018, the lowest since 2012. Competition in corn markets is fierce from South America and Ukraine.