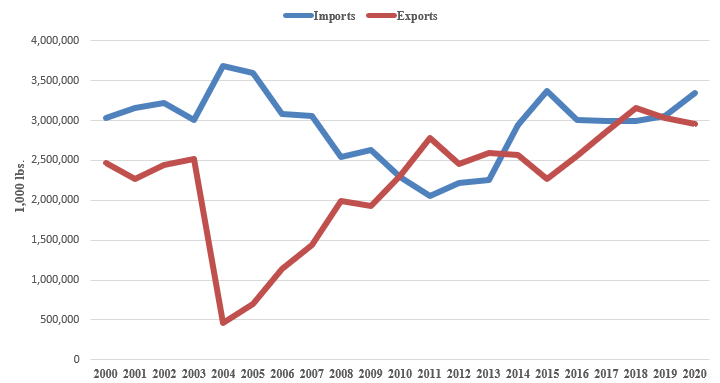 U.S. beef and veal exports in 2020 were down 2.3 percent compared to 2019. In comparison, U.S. beef imports were up 9.3 percent. The result—the U.S. had a trade deficit in beef where imports outpaced exports. In raw numbers, the U.S. imported 3.34 billion pounds and exported 2.96 billion pounds.

The beef processing slowdown caused by COVID-19 impacted beef trade. Monthly U.S. exports in April and May were down significantly due to lack of supply while imports were up presumably to partially offset the processing slowdown. However, a surge in exports in November and December, aided by a decline in the value of the dollar, against competitors’ currencies, helped exports finish the year strong. Derrell Peel, extension livestock marketing specialist at Oklahoma State University, says last year’s exports were the third largest on record.

The USDA is projecting beef exports will increase 6 percent in 2021. If realized, exports could near record levels. The growth is expected in part to continued strong demand and the strengthening of the Australian dollar against the U.S. dollar. This helps the U.S. be competitive into Asian markets. Thus far in 2021, export sales to Mexico, China, and South Korea appear to be running ahead of last year. Exports to Japan, though, are largely flat. U.S. beef imports are projected to be off 10 percent, primarily due to tighter supplies in exporting countries.