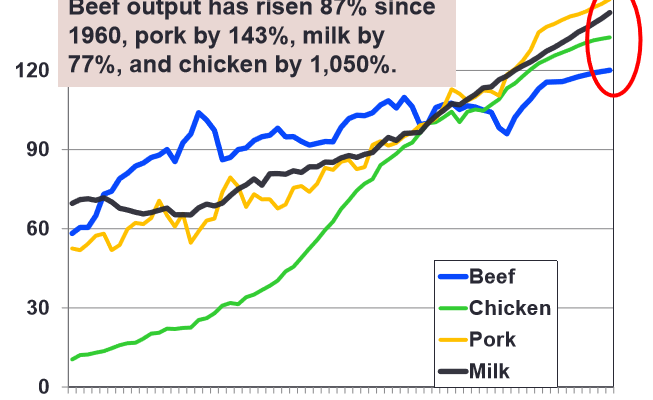 Nebraska’s total cattle and calf inventory was estimated at 6.8 million head on Jan. 1 according to USDA National Agricultural Statistics Service (USDA-NASS). The number is roughly the same as last year. Beef cows that have calved totaled 1.941 million head, up 2 percent from last year. That means there is one beef cow which has produced a calf for each Nebraskan. Nebraska ranks fourth among the states in the number of beef cows which have calved following Texas, Oklahoma, and Missouri. Nebraska’s calf crop in 2018 was 1.75 million, up 50,000, or 3 percent, from the prior year. Nationwide, all cattle and calves totaled 94.8 million head, up one-half million head from last year. The beef cow herd totaled 31.77 million head, up 1 percent. Over the last four years, the nation’s beef herd grew 2.9 percent in 2016, 3.5 percent in 2017, and 0.8 percent last year, causing an increase in the U.S. calf crop for four consecutive years.

As a result, beef production is expected to grow into next year. The USDA projects beef production this year will be 27.3 billion pounds, down from the previous month’s forecast, but still higher than last year. It also projects production to continue to grow in the foreseeable future. The chart below shows U.S. meat and milk production beginning in 1960 with forecasts for future years. Production in 2005 is the baseline—points above 100 indicate production that year exceeded or will exceed production in 2005. Growing beef supplies will pressure cattle prices. Prices this year are projected by the USDA to remain steady, but then trend lower in future years. Estimates by the (Food and Agricultural Policy Research Institute (FAPRI) show cattle prices trending lower for the next two years then turning slightly higher in future years. If beef exports continue to grow at last year’s torrid pace, it will help offset the growing supplies.