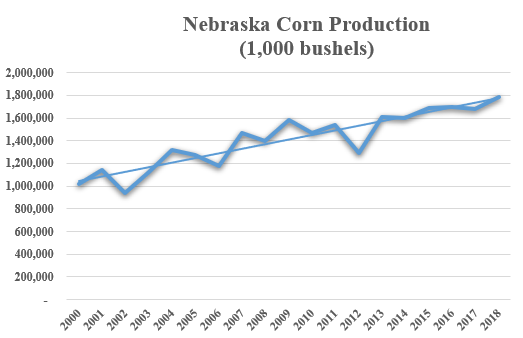 Source: NEFB based on data from USDA-NASS

The 2018 production numbers and percentage changes from 2017 for several Nebraska crops are shown in Table 1. The biggest production change from year-to-year was in sorghum, up 38 percent from the prior year. The big spike is directly attributable to an increase in planted acres last year. The production of hay also grew significantly last year. Interestingly, in the production of hay, alfalfa, haylage, etc., Nebraska is second only to Texas in tons of production. On the other end of the spectrum, sunflowers and dry beans saw the largest production declines last year. Again, this is due to less acres being planted to these crops. Sunflower acres were down 19 percent from the prior year and dry bean acres were down 22 percent.