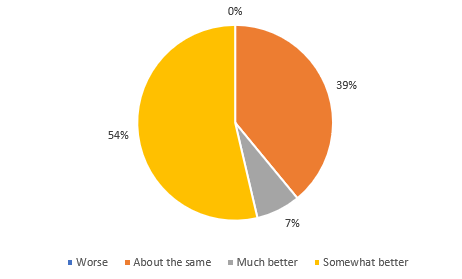 A webinar sponsored by Nebraska Farm Bureau on February 10, which focused on Nebraska’s agricultural economy, provided the opportunity to poll Nebraska producers on questions inquiring minds want to know—current financial conditions, planting intentions, and this year’s calf crop. Roughly 100 people participated on the webinar and the number of respondents ranged from 19-41 depending on the question. While the poll was non-scientific, it provided a peek into producers’ thinking in February entering the 2021 planting and calving seasons.

The second question concerned producers’ planting intentions this spring. Planting season is nigh, and agriculture is eagerly watching for hints regarding producers’ decisions on corn and soybean acres to be planted. The USDA mailed its planting intentions survey to producers in late February and the results will be released March 31. USDA projections released during the 2021 Agricultural Outlook Forum showed nationwide corn acres would equal 92 million acres, up 1 million from last year, and soybean acres would hit 90 million, up 7 million. The majority of respondents to Farm Bureau’s non-scientific poll, 39 percent, said they intend to increase acres of both crops (Figure 3). However, a 36 percent indicated they intend to plant less corn acres and more soybeans. Only 4 percent said they plan to plant less of both crops.

The final question asked about calving numbers this year. Nationally, beef cow numbers were down slightly on January 1, so most pundits expect this year’s calf crop to be off slightly. Nebraska beef cow numbers totaled 1.90 million head, down 1 percent, also suggesting a smaller calf crop. Responses to the poll question, though, were mixed. A slight majority, 53 percent, said they expected a calf crop of about the same size as last year, but 32 percent said they expected more calves to be born this spring (Figure 4). Another 16 percent responded they expected fewer calves.