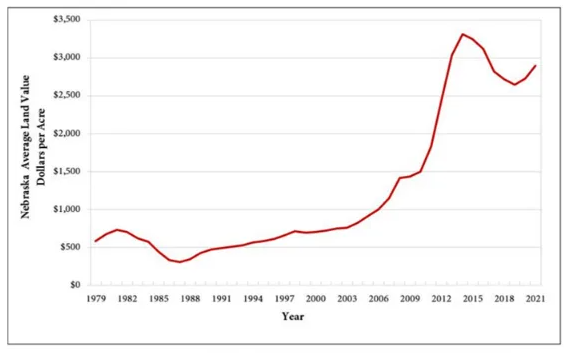 Preliminary numbers from the University of Nebraska Department of Agricultural Economics’ annual real estate survey show the average market value for agricultural land in Nebraska increased 6 percent over the past year (Figure 1). This marks the second consecutive year the survey reported higher land values—the average value was up 3 percent last year. The average land value this year is $2,895 per acre, 13 percent below the 2014 high of $3,315 per acre.

Rental rates were also higher this year with cropland rates up 5-7 percent and pasture rates up 3-7 percent. Survey participants reported that improved crop prices, low interest rates, and federal assistance payments helped boost land markets over the past year. For more information on the survey results, go to: http://agecon.unl.edu/realestate.