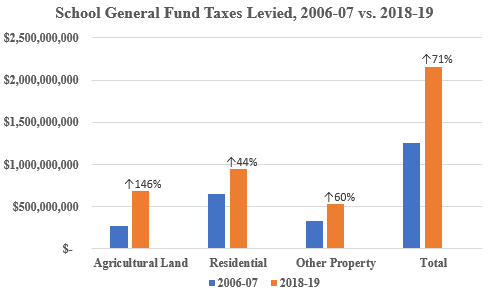 This year’s legislative discussions on property tax reform have largely focused on property taxes used to fund schools. Schools in Nebraska levy over $2 billion in taxes each year, representing 60 percent of the total taxes collected statewide. However, farmers’ and ranchers’ school taxes typically represent 70-75 percent of their total tax bill because they do not pay city property taxes. The chart below illustrates the growth in general fund taxes levied by schools between school years 2006-07 and 2018-19. The figures are estimates calculated by Nebraska Farm Bureau based on general fund levy and valuation data from the Nebraska Department of Education and Nebraska Department of Revenue. The estimates do not include bond levies or special building fund levies. The blue and orange bars show the amount of taxes levied on agricultural land, residential property, all other property sectors combined, and total taxes in school years 2006-07 and 2018-19. The numbers above the bars show the percentage increases in taxes between the two school years

Given the significance of taxes paid to schools in the overall property tax burden, it’s sensible for the Legislature to focus on the state’s role and obligation regarding school funding. Whether it’s through providing schools a per student foundation aid, a boost in special education funding, more TEEOSA aid, or assuring the state pays a minimum percentage of a school’s basic funding, look for any property tax package to contain a focus on school funding in this year’s Legislature.