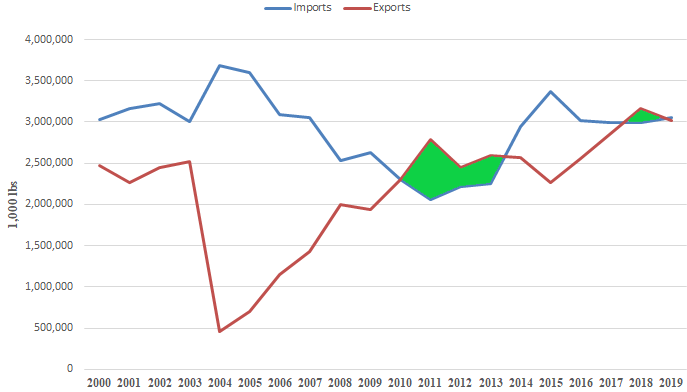 The recent update of beef trade numbers for last year by the USDA provide the opportunity to examine the latest in beef trade. Figure 2 plots U.S. trade in beef and veal since 2000.

The volume of annual beef imports is shown by the blue line, and the volume of exports by the red line. The area shaded green indicates years when beef exports exceeded beef imports, or the U.S. experienced a trade surplus in beef. U.S. exports of beef are typically high-value, muscle cuts. Imports tend to be product intended for processing into ground beef for hamburgers, pizza, tacos, and more.

The U.S. is a net importer of beef in most years. In fact, in many years, the U.S. is the largest beef importing country in the world. Imports generally equate to 8-12 percent of total U.S. beef production. This often begs the question: Why is a large beef producer like the U.S. also a large importer of beef? In short, beef markets are not homogenous. Consumers across the globe demand different cuts and kinds of beef, while producers specialize in different kinds of production. Trade allows producers and consumers to maximize their welfare by providing consumers the kinds of beef they want and allowing producers to capture increased value for products they specialize in. As noted earlier, most U.S. imported beef is intended for ground beef to be used primarily in the food service industry. Because imported beef fills this need, the U.S. can sell more higher-value muscle cuts domestically and abroad. Consumers benefit through lower hamburger and pizza prices. Producers benefit through the sale of higher-value products.