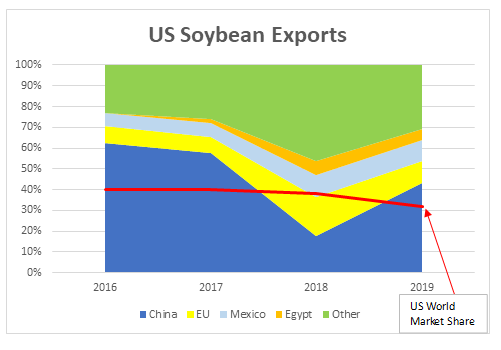 President Reagan was quoted as saying that if the game Trivial Pursuit were designed by economists, the game would have been named, “100 Questions and 3,000 Answers.” President Reagan’s quip is the title of a Tidbits feature called…100 Questions and 3,000 Answers. This feature highlights questions or comments from readers along with responses. Join the fun, send questions or comments to jayr@nefb.org.

Question: One facet that I have not seen data about is what happened with our market share in other markets while we were shut out of China? What will happen in those markets if China returns to us with the purchases indicated by the Phase 1 agreement?

Response: These questions were sent in response to a Tidbit story in January on the signing of the Phase 1 trade agreement with China. Under the agreement, China has agreed to purchase significant amounts of agricultural goods. Prior to the trade dispute, China was a large importer of U.S. agricultural goods with total purchases ranging between $19-21 billion. Soybean shipments accounted for the bulk of purchases, accounting for 52 percent, 67 percent, and 63 percent of U.S. agricultural sales to China between 2015 and 2017. Because soybeans were by far the largest export product to China before the dispute, it will be the focus of the response to the questions.

Figure 2 shows the shares attributable to the largest purchasers of U.S. soybeans between 2016-19 along with U.S. world market share (red line). Pre-dispute, 2016 and 2017, sales to China accounted for 62 percent and 57 percent, respectively, of total U.S. sales of soybeans. In 2018, the year the dispute began in earnest, China’s share of U.S. soybean sales dropped to 18 percent (the shrinking blue band in Figure 2). It rebounded in 2019 to 43 percent but was still well below pre-dispute levels. At the same time, the U.S. share of world soybean exports dropped from 40 percent in market years 2015/16 to 32 percent in 2017/2018. Not all the lost sales to China were made up by shipments to other countries.

One would presume if China steps up its purchases of U.S. soybeans under the Phase 1 agreement, the shares of world export markets and purchases would begin to move back towards that which existed prior to the trade dispute. However, market conditions have changed. Competitors to the U.S. in China, most notably Brazil and Argentina, have established inroads into the lucrative Chinese markets and won’t let go easily. Also, countries which increased purchases of U.S. soybeans may not be able to afford to compete with China. Add to this the uncertainty created with the COVID-19 outbreak, and it may be a few years before ultimately knowing how market shares respond to the Phase 1 agreement.