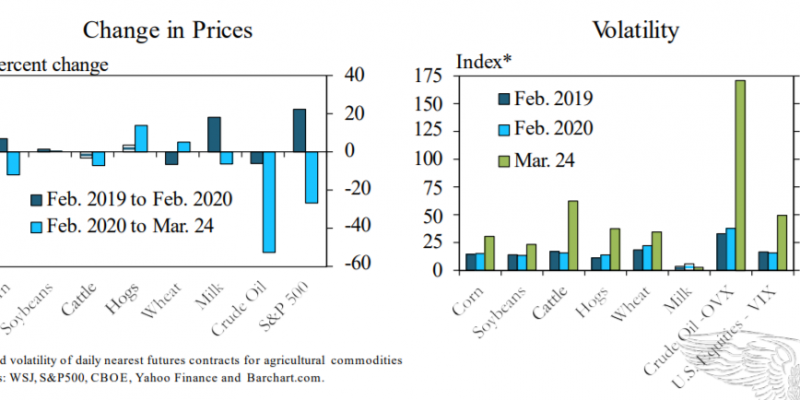 The COVID-19 pandemic, economic stoppage, consumer behavior, and underlying supply and demand conditions created a whirlwind of uncertainty and volatility in the markets. In order to get a sense of how the commodity price movements might impact Nebraska agricultural producers, estimates were calculated on how the changes in prices in March could impact revenues for Nebraska’s three largest agricultural sectors—beef cattle, corn, and soybeans.

Source: From presentation by Nathan Kaufman, Federal Reserve Bank of Kansas City, on webinar sponsored by FarmDoc Daily at the University of Illinois, March 27, 2020.

Beef Cattle: Estimates of the potential impact to Nebraska’s cattle sector were calculated borrowing approaches used by Kansas State agricultural economist Glynn Tonsor. Tonsor calculated the price changes over the past few weeks could impact the nation’s cattle sector between $7.98-$9.4 billion. Estimating impacts to the cattle sector is complicated by the different sectors in the industry (cow/calf operators, stockers, backgrounders, and feeders) and the timing of cattle sales throughout the year.

Informal inquiries of persons in the industry suggested 95 percent of the cows in Nebraska calve in the spring. Of the calves born, 75 percent are weaned and sold in the fall, a few are kept and sold as yearlings the following year, and the remainder backgrounded and sold in winter or early next spring. Assuming 20 percent of last year’s calf crop was held and backgrounded for sale in April and using the April feeder cattle futures contract declines between March 2 and March 25 of $6.60/cwt., results in a $49.50 per head or $17.8 million impact to these producers. Assuming a calf crop of 1.77 million head this year, with 75 percent of the calves sold in the fall, and using the declines in the October feeder cattle futures contract, equates to a potential $71.9 million impact to the sector.

The USDA reported 2.5 million head of cattle in the state’s feedlots as of March 1. Estimates of the impacts to the feeding sector are complicated by the fact some of the cattle in the feedlots had already been marketed, or hedged, prior to March, but some not. Additionally, the price changes in March changed the economics of cattle placed in feedlots during the month and over the remainder of the year. So, using the average decline in the April and August feeder cattle futures contracts between March 2 and March 25 of $7.56/cwt., or $105.84 per head, and assessing it against the 2.5 million head on feed on March 1 suggests an impact of $264.6 million. In total, then, the price declines in the cattle markets between March 2 and March 25 might have a $354 million impact on the state’s cattle sector.

Corn/Soybeans: According to data provided by the Nebraska Corn Board, 43 percent of the corn marketed during the year is sold in the months of March-September, and 36 percent is sold between October-December. For these estimates, the assumption was made soybeans are marketed similarly. To calculate the price declines, changes in the appropriate futures contracts between March 2 and 25 were used, and changes in the basis were also considered using Kansas State University crop basis maps. Using last year’s crop production numbers, and the assumptions noted above, corn and soybean producers selling 2019 production this year could see an impact of $387 million. Using assumptions of crop production levels this year, and the share of new crop production which will be sold yet this year, equates to impacts on this year’s production of $280 million. So, the total potential impact to corn and soybean producers could amount to $667 million.

Summary: Compared to pre-COVID prices, Nebraska’s cattle, corn, and soybean producers might see a potential impact of $1.02 billion, or 5 percent of Nebraska’s annual agricultural receipts. These estimates are simplistic and do not account expense reductions which might occur which could offset the revenue impact. For these reasons, the estimates are intended to provide a sense of the magnitude of the impacts to Nebraska’s largest industry during these uncertain times and volatile prices and not an accurate accounting. Fortunately, for some in agriculture, there is flexibility regarding the timing of sales so they might be able to seize better market opportunities over the next few months.