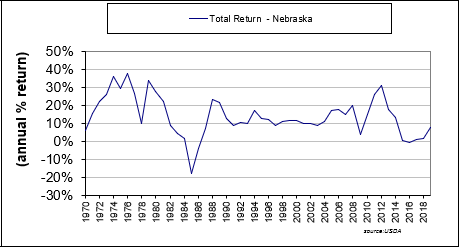 Figure 1 plots total returns on Nebraska farmland since 1970. Farmland return is defined as rental income plus capital appreciation minus property taxes, divided by the initial value. In most years, returns to farmland were at least 10 percent if not higher. The only exceptions were years when land values declined, the mid-1980s and the last few years. Thus, the experience in Nebraska has been largely the same as other agriculturally-predominate states—a fairly consistent return of 10 percent or more.

Figure 2 breaks down the two components to total returns for Nebraska—capital gains (dark bars) and rental income (green line)—along with the statewide average per acre value of agricultural land (blue line). Return rates from rental income are stable over the period, although trending downward. Comparatively, the rates of capital gain, while mostly positive over the period, fluctuated greatly. Clearly, capital gains are the major contributor (both positive and negative) to fluctuations in total returns. Happily, for Nebraska landowners, the years of positive returns to farmland outnumber years with losses, although it’s important to remember capital gains are not realized unless the farmland is sold.