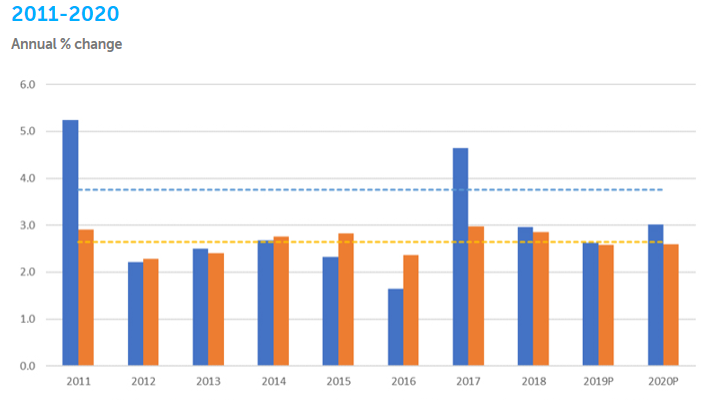 Christine Lagarde, Managing Director of the International Monetary Fund (IMF), described the world’s economy as facing a “delicate moment” in a recent speech to the U.S. Chamber of Commerce. Lagarde said growth in the global economy is slowing, and for this year, the IMF expects 70 percent of the world economy to experience a slowdown in growth. In January, the IMF projected global growth for this year and next at 3.5 percent, but that is likely to be ratcheted down in the next forecast. Lagarde says the slowdown in global growth is largely due to rising trade tensions and tightening of financial conditions by the world’s central bankers.

Echoing the Lagarde comment, the World Trade Association (WTO) last week cut its forecast for trade growth in merchandise trade volume this year to 2.6 percent, more than a percentage point less than its last forecast. The WTO said world trade grew 3.0 percent in 2018, less than its forecast of 3.9 percent. The WTO also cites rising trade tensions for the trade slowdown. Trade growth could be anywhere within a range of 1.3 percent to 4.0 percent depending on whether trade tensions continue to rise. This year’s forecast growth is well below the average trade growth experienced since 2000.

Slowing global economic and trade growth does not portend well for a turn-around in the near term for Nebraska’s agricultural economy. With bulging worldwide commodity supplies, and rising meat production, Nebraska producers need a healthy expansion of the world’s economy, demand, and trade volume to see positive returns. Typically, the value of agriculture exports account for 30 percent of the gross receipts received by Nebraska producers. Unfortunately, if the forecasts are correct, neither global economic growth or growth in trade will provide the demand necessary to spark a turn-around in agriculture’s fortunes.