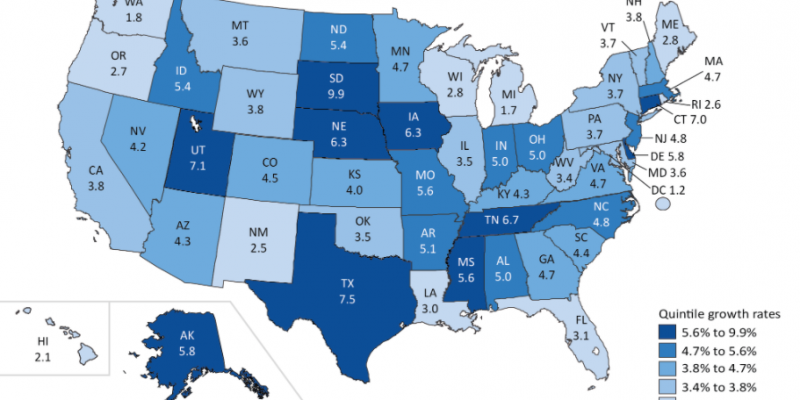 Projections for U.S. economic growth for the rest of 2021 have turned increasingly positive over the past few months. At the March meeting of the Federal Open Markets Committees (FOMC), the Federal Reserve’s monetary policy making group, the group revised its estimated real gross domestic product (GDP) growth rate to 6.5 percent, more than 2 percentage points above the December growth projection of 4.2 percent. The FOMC also estimated an annual unemployment rate of 4.5 percent and inflation rate of 2.4 percent.

The Federal Reserve isn’t the only entity more bullish on the economy. Wells Fargo has increased its forecast growth to 6.4 percent; the International Monetary Fund (IMF) now projects U.S. economic growth at 6.4 percent; and Goldman Sachs has raised its forecast to 7 percent. All levels unseen in recent history.

There are several reasons for the increased positivity in the economic forecasts. First, the recently passed $1.9 trillion federal stimulus package put additional cash in consumers’ hands. This is on top of money consumers saved from assistance provided last year. Kiplinger reports consumers saved 16.3 percent of their disposable income last year. So, consumers have plenty of cash to spend. Second, progress on vaccination and the seemingly control of the pandemic has businesses reopening and consumers venturing out. Third, manufacturers and other businesses are hiring as they work to keep up with demand. Finally, the MLB baseball season has begun. Baseball is always a positive. Supply glitches, inflation, and ongoing concerns with COVID-19 continue to hang over the economy as concerns.

The economic growth, increased employment, and hopeful return to normalcy in the hotel and restaurant sectors is good news for agriculture. More jobs and wages mean people will spend more on food. It also means consumers will eat out more often. When consumers eat out, they tend to spend more, and they tend to buy higher-valued cuts of meat. And, venturing out means more travel, more gasoline purchased, and more ethanol sales. Forecasts show economic growth slowing in 2022 and 2023, but the economy in 2021 is putting the pedal to the metal. Enjoy the ride.

Chart(s) of the Month