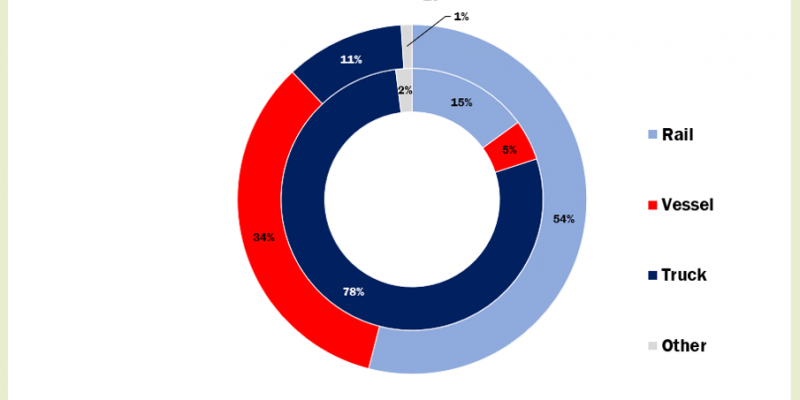 President Trump walked back his threat to close the border with Mexico to trade, but President Trump, if nothing else, has demonstrated he can change his mind on dime. What might be at stake for Nebraska if the border were closed? In 2018, the U.S. exported more than $19 billion in agricultural products to Mexico. Nebraska Farm Bureau estimates show Mexico imported almost $890 million in Nebraska commodities in 2017.

Recently AFBF economist Veronica Nigh examined statistics on the means of transport of U.S. trade with Mexico. Overall, 69 percent of the two-way agricultural trade between the U.S. and Mexico occurs by truck, 20 percent by rail, 9 percent by vessel, and 2 percent by other means. Most of the grain or oilseeds trade occurs by rail. Nigh reports that 54 percent of the coarse grains and oilseeds travel by rail, 34 percent by vessel, and 11 percent by truck. Because of Nebraska’s proximity to Mexico, and the make-up of its exports, it is likely the percentage of Nebraska’s exports shipped by rail is higher. Other agricultural exports, like beef and pork, are more reliant on truck transport. Truck shipments account for 78 percent of bi-lateral trade and rail only 15 percent. These products tend to be higher-valued, perishable and seasonal which makes truck transport a better alternative.

Nebraska, because of its geographic proximity to Mexico and the importance of Mexico as an export customer, will be noticeably affected by a border closure. The affects will vary depending on the commodity exported and means of transport, but all segments of Nebraska agriculture and transportation will feel the influences.