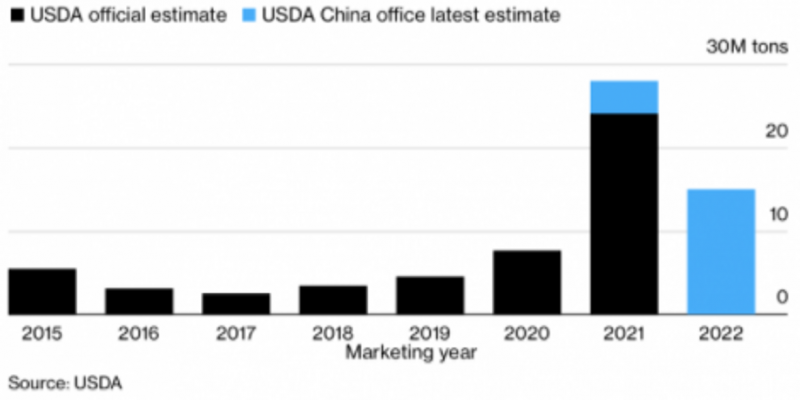 What a difference a year makes. Last year at this time, commodity prices had plummeted, were struggling to recoup ground, and the light at the end of the tunnel appeared to be an oncoming train. Today, prices for corn, soybeans, wheat, and other commodities have hit levels not seen since 2013. What’s changed?

The emergence of a dragon with a huge appetite—China. Sure, production concerns in South America, smaller U.S. crops than expected, and other production hiccups have been supportive of prices, but the primary market mover has been China. Just last week, futures prices jumped on rumors of China looking to purchase U.S. corn and Brazilian weather concerns.

China’s commodity purchases have been substantial. The USDA Foreign Agriculture Service (FAS) reports that between September and April 1, U.S. soybean exports reached 59 million tons, with China accounting for 60 percent of the total. Soybean exports to China have nearly tripled compared to the prior year. The FAS expects Chinese corn imports will be 215 percent larger this marketing year and U.S. total corn exports 43 percent greater. Chinese total pork imports this year are projected to be 4.85 million metric tons. Not as high as 2020, but still about twice as large as 2019. Wheat imports by China are expected to almost double.

There are many reasons for China’s voracious appetite. The ongoing African Swine Fever outbreak in its hog sector is contributing to short pork supplies, the rebuilding of its hog sector is boosting feed demand, favorable exchange rates, tightening commodity stocks in China, the Chinese government’s desire to keep food prices in check, and the Phase I agreement are all contributing. A difficulty for Nebraska producers when deciding how and when to price their production is the risk associated with having one buyer, China, driving the markets. The magnitude of its market presence and the inherent political tensions of dealing with a country with a centralized government, heavily intertwined in the country’s economy and controlled by one political party, presents risks not existing with other trading partners. As producers have learned from the past, trade with China can turn on a dime.

Tensions between China and the U.S. have been rising over human rights issues, Chinese ambitions in the South China Sea, relations with Taiwan, technology and intellectual rights, and governance of Hong Kong. Any spark could set off a chain of events which could disrupt trade in short order. One market analyst recently commented corn prices in the fourth quarter could be as low as $4.00 per bushel if China pulls out of the market and the U.S. has good growing conditions or as high at $7.00 per bushel if China continues to buy and the U.S. has bad weather. While the supply and demand fundamentals look supportive for continued Chinese buying, sometimes politics can get in the way of market fundamentals. Something for producers to ponder when developing or adjusting market plans over the coming months.

Be Careful with Comparisons