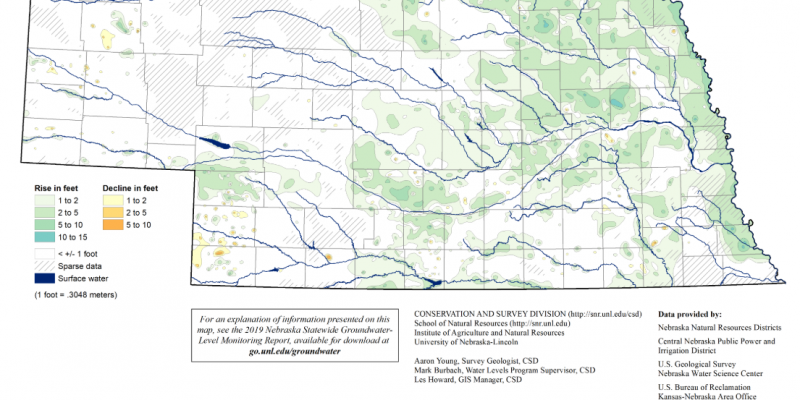 Maps released by the University of Nebraska Conservation and Survey Division (CSD) showed groundwater levels in 2019 rose compared to 2018 levels (Figure 1), not surprising given the moisture which fell on the state last year—151 of 163 recording stations reported precipitation values above the 30-year normal.

The CSD has produced groundwater level reports and maps in cooperation with the U.S. Geological Survey since the 1950s. Groundwater levels are measured in thousands of wells across the state and compared to levels from previous years. Rises were recorded in 2019 in 82 percent of the wells measured and 49 percent of the wells recorded a rise of greater than 1 foot. In contrast, 4 percent of all measured wells saw declines of greater than 1 foot. The average groundwater level increase was 1.30 feet. The largest rises occurred in Colfax County, roughly 12 feet, with similar increases occurring in Antelope County. Areas in the Missouri River Valley recorded rises of 5-10 feet. A few declines were recorded in the Panhandle and Southwestern Nebraska.

Figure 2 shows 2019 groundwater levels relative to predevelopment. Predevelopment levels are presumed to be those that predated intensive groundwater irrigation. Long-term areas of acute declines can be seen in Box Butte County and Southwestern Nebraska. Moderate or slight declines are seen in parts of South-Central and Southeastern Nebraska. Areas with increases have also occurred, with the areas of the largest increases corresponding to surface water irrigation systems which seep water from canals or reservoirs.