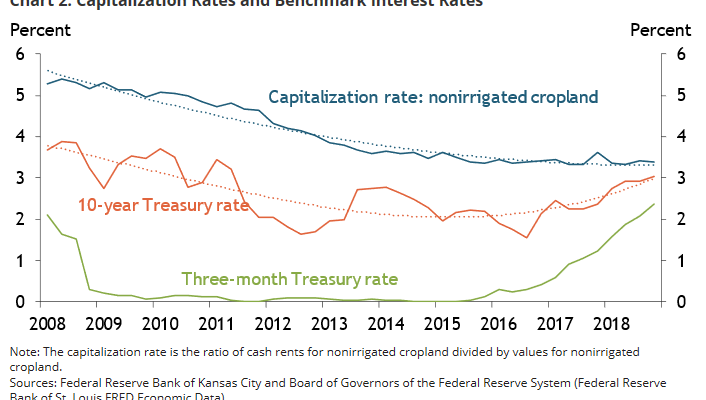 Farmland values have been surprisingly resilient over the past few years. Land values today are lower than the highs seen in 2014, but the declines in values have not been as marked as the declines in crop prices or farm income. According to the Federal Reserve Bank of Kansas City, cropland values in the Tenth District, which includes Nebraska, declined 16 percent from 2013 to 2018.

However, a report by Cortney Cowley and Nathan Kauffman, economists with the Kansas City Federal Reserve Bank, hints the risks of further declines in farmland values have increased. Chart 2, created Crowley and Kauffman, shows capitalization rates, or rates of return, on farmland have decreased over the past decade. From an investment perspective, this means land owners are receiving lower returns on dollars invested in farmland.

Crowley and Kauffman state, “The gaps between the blue line and the green and orange lines in Chart 2 show that in 2018, the spread between capitalization rates on farmland and risk-free returns narrowed to its lowest level in 10 years. For the spread to return to a more historical level in the current interest rate environment, either cash rents would need to increase or farmland values would need to decline. Given current commodity prices in agriculture, it seems unlikely that cash rents will increase in the foreseeable future. Thus, for the spread to return to a more historically normal level, farmland values would need to decline.” Crowley and Kaufman aren’t saying farmland values will decline. Instead, they’re saying the conditions suggest the risk of a decline has increased. Whether or not farmland values decline will depend on investors in land and whether they choose to seek greater returns elsewhere.