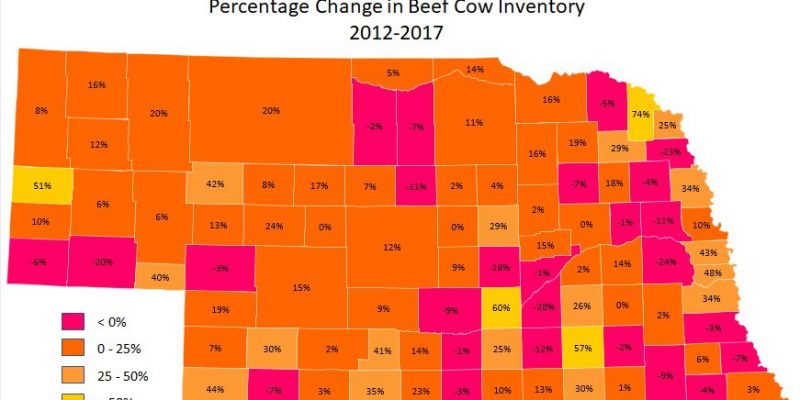 With the release of data from the 2017 Census of Agriculture, “number nerds” will be sorting through the data to examine changes which have occurred over the 5-year period between censuses. The map below is a case in point. The map plots the percentage changes in beef cow numbers in Nebraska counties between 2012 and 2017. Overall, beef cow numbers in Nebraska, 1.97 million head in 2017, were almost 181,000 head greater than the number recorded in 2012, or 10 percent more.

In 2017, there was roughly one cow for every Nebraskan. But not every county saw cow numbers increase during the five-year period. The number of cows decreased in 26 counties, with Hamilton county’s herd shrinking the most at 28 percent. At the same time, 20 counties had their numbers increase by at least 25 percent, with Dixon county increasing the most at 74 percent more than 2012.

At first glance there doesn’t seem to be any rhyme or reason or geographical pattern as to why counties experienced increases or decreases in cow numbers between 2012 and 2017. Hamilton county had the greatest decline, yet counties bordering Hamilton county, like Hall and Fillmore counties, had percentage increases of 60 and 57 percent respectively. Moreover, there doesn’t appear to be any correlation between the number of cows reported in 2017 and the percentage changes experienced between 2012 and 2017. But looking closer, geographic patterns emerge. First, cow numbers did not decline in any county in the northwest part of the state. And, 19 of the 26 counties which lost cows are east of a line running north from Franklin to Buffalo counties then angling northeast to Dixon county. This could suggest eastern Nebraska is moving away from cow-calf production systems, while such systems continue to grow in parts of the state where they are already prevalent.