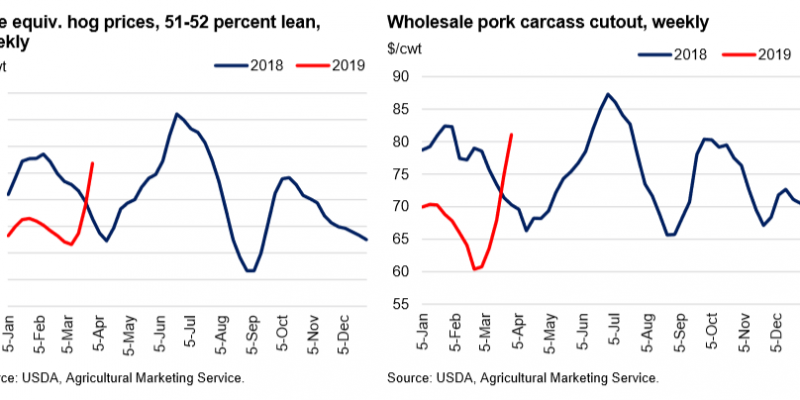 The outbreak of African Swine Fever (ASF) continues to spread in China and has now been reported in several other countries in Southeast Asia such as Vietnam and Cambodia. The production losses in China stemming from ASF are likely to shape world protein markets for the many years. Bloomberg News reports that more than 80 percent of Chinese farms are choosing not to restock. Reuters reported China’s pork production fell 5 percent in January through March of this year and the USDA projects pork production in China this year will fall 10 percent.

Pork accounts for more than 60 percent of meat consumption in China. Thus, greater imports by China will be needed to offset the pork production loss. USDA projects Chinese pork imports will increase from 1.6 million tons last year to 2.2 million tons this year. Global trade patterns and protein supplies will shift to offset the Chinese deficit. The shifts will create more volatile conditions in the world’s protein markets. Prices have already reacted dramatically to the Chinese developments. The USDA reports the price of lean hogs climbed 49 percent in March and the Wall Street Journal reported pork carcass prices have climbed 40 percent in the last two months. In its latest projections, USDA adjusted hog price forecasts higher due to ASF.

How will the ASF-induced market shifts affect Nebraska? In 2017, Nebraska exported $247 million of pork products. Chinese tariffs on U.S. pork exports due to the current trade spate hinder direct sales of pork to the country. U.S. pork sales to China slowed to a trickle last year when the tariffs were imposed. But, with the ASF outbreak, the pace of U.S. pork exports to China have increased in recent weeks. The USDA projects overall U.S. pork exports to be 5 percent greater this year compared to last year. Nebraska’s pork exports should follow suit.
The Chinese could also import more beef or poultry as a substitute for pork in their diet. Here again, trade restrictions on U.S. beef and poultry exports into China limit the potential for direct sales. But protein sales from competing countries to China could result in market opportunities for U.S. product in other countries as competitors fill the void in China. The might create opportunities for Nebraska beef producers.

One negative effect of the ASF outbreak for Nebraska producers will be less soybean sales to China. China’s soybean imports are used to make feed for pork production. Reduced pork production means less soybeans needed for feed. The USDA forecasts China’s soybean imports to decline this year. Soybeans are typically Nebraska’s largest export commodity based on value, so the ASF outbreak will likely mean fewer soybean exports this year.