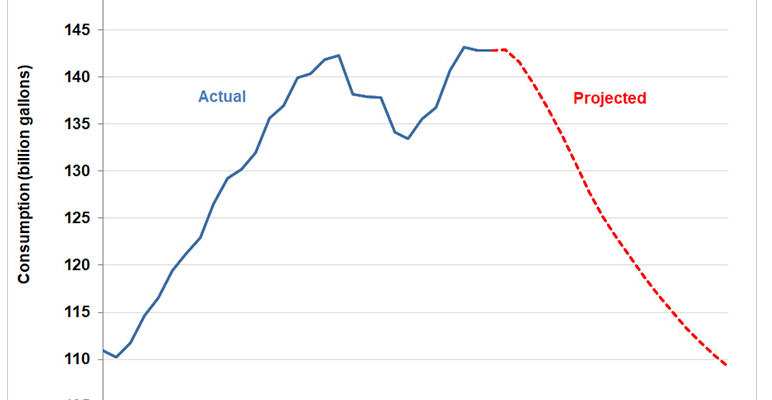 The demand for ethanol is obviously tied to overall fuel consumption. While some ethanol is exported, roughly 10 percent of production in 2018, most of it is consumed domestically. Below is a graph of actual and projected U.S. gasoline consumption based on Energy Information Agency taken from a farmdoc daily article by Scott Irwin of the University of Illinois.

Gasoline consumption trended steadily higher until high oil prices and the economic recession in 2008-09 resulted in a significant consumption drop. Starting again in 2014, consumption grew again until flatlining in 2017 and 2018. Most concerning for the ethanol industry is the steady decline in gasoline consumption projected for the future. Irwin reports the EIA baseline projection for 2030 is 26.1 billion gallons, or 18.2 percent less than the consumption forecast for this year.

Many factors are contributing to the decline in gasoline consumption–the growth in ride-sharing; increasing fuel efficiency; and growth in the use of electric vehicles. Bloomberg New Energy Finance forecast sales of electric vehicles will overtake internal combustion vehicles in the early 2030s. Despite the cause, unless ethanol can further penetrate the fuels market or boost exports, the decline in gasoline consumption portends a decline in ethanol consumption as well. At a 10 percent blend rate, ethanol consumption would fall 2.6 billion gallons by 2030 if the projections hold true. As the second-largest ethanol producing state, Nebraska will feel the implications of such a drop in ethanol demand. Irwin, S. “Implications of Recent Trends in U.S. Gasoline Consumption for Ethanol.” farmdoc daily (9):66, Department of Agricultural and Consumer Economics, University of Illinois at Urbana-Champaign, April 12, 2019.