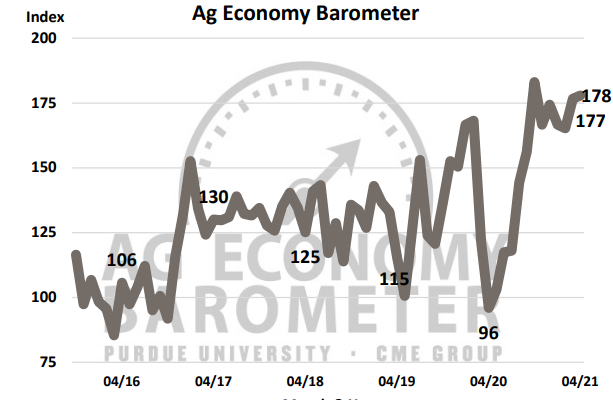 Two measures of economic conditions in rural America have reported significant positive gains, no doubt reflective of the improved financial conditions for crop producers. First, the Ag Economy Barometer, a nationwide measure of the health of the agricultural economy developed by the Purdue Center of Commercial Agriculture and the CME Group, reports an index of 178, near it’s all time high.

The sentiment index is calculated based on survey responses of 400 agricultural producers and 100 agriculture and agribusiness leaders. The index uses conditions in October 2015 as a baseline. An index of greater than 100 indicates greater positivity towards the agricultural economy compared to October 2015. The report authors note that “strength in commodity prices continues to drive improving expectations for strong financial performance” among agricultural producers and agribusiness leaders.

Second, the Rural Mainstreet Index (RMI), created by economist Ernie Goss of Creighton University, has “rocketed to a record high” according to the latest report. Based on surveys of community bank presidents in 10 non-urban agriculturally and energy-dependent states, including Nebraska, the RMI registered an index of 71.9. A reading above 50 suggests a growing economy. In the latest survey, nearly 69 percent of bankers reported an expanding economy. For Nebraska, the index reached 78.8, up from the previous month’s reading of 58.4. However, Nebraska’s rural economy is still down 3,400 nonfarm jobs, or 1.2 percent of nonfarm employment, compared to pre-COVID levels. The report attributes the leap higher in the index to sharp gains in grain prices and low interest rates.

Clearly, Nebraska’s rural economy is experiencing impressive economic growth for the first time in many years. Surging grain and oilseed prices signify greater returns for the state’s crop producers. Improving returns denotes more farmer spending which, in turn, spills out and ripples through the rest of the economy. The 2020 report, The 2017 Economic Impact of the Nebraska Agricultural Production complex, by the University of Nebraska Department of Agricultural Economics stated that “each dollar of crop production value would yield $0.61 in additional receipts for Nebraska businesses outside the agricultural production complex.” Combined with the forecasts for brisk growth in the nonfarm economy, the rising economic tide in 2021 appears to be lifting all boats.

Where are the Absentee Landowners?