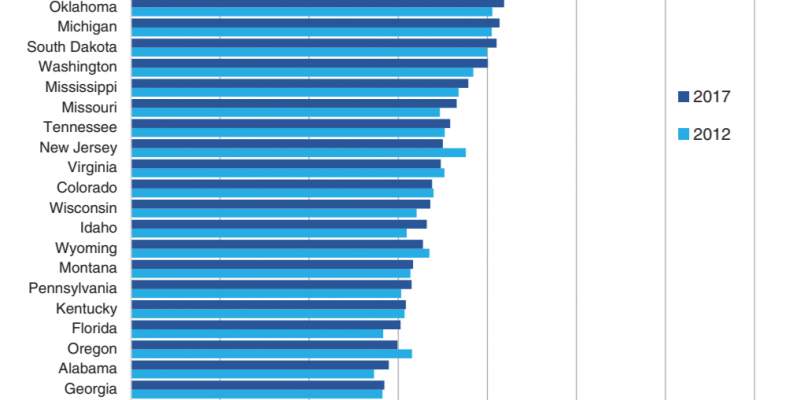 Nebraska ranks tenth among states in the percentage of ground rented with Illinois topping the nation at nearly 60 percent (Figure 3). Rented land is generally owned by absentee landowners who live outside the area where the land is located. A recent study by the USDA Economic Research Service (ERS) sought to shed light on absentee landowners and the distances between their place of residence relative to the land they own.

In 25 states studied, the USDA researchers found the majority of nonoperator landowners reside within 100 miles of the land they rent. In fact, 67 percent of the acres leased, over 180 million acres, are owned by persons who reside within 50 miles of the land (Figure 4). Another 24 million acres is leased by owners who live between 50 – 100 miles away.

In Nebraska, the average distance between rented land and the landowners is 164 miles (roughly the distance between Lincoln and Lexington). One-half of nonoperator landowners of Nebraska land live within 13 miles of their rented land, and 75 percent of landowners live within 102 miles.
Sometimes concerns are expressed with the lack of connection between absentee landowners and the communities where the land is located. Particularly with those who live out-of-state or live long distances from the land they own. Landowners’ states of residence weren’t identified in the USDA research, but given its findings, it would seem most absentee owners of Nebraska land reside in the state. Thus, it’s likely that owners of Nebraska farm and ranch land still have a connection to the land and communities where the land is located.