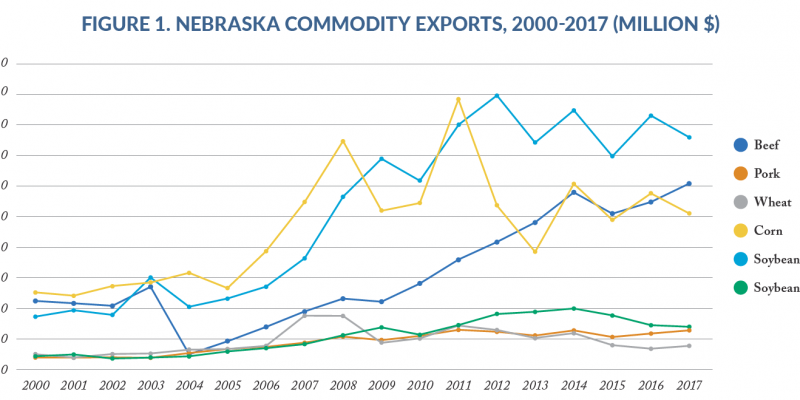 Agricultural exports in 2017 were worth more than $130 million for Cuming, Platte, Holt, Custer, and Dawson counties, the top Nebraska counties in terms of export value. This and other findings are part of a Nebraska Farm Bureau report on the value of agricultural exports to the state’s agricultural producers and counties. This year marks the second iteration of the report and includes comparisons of export data from 2016 and 2017. Commodities included in the analysis were corn, soybeans, soybean meal, beef, hides and skins, pork, wheat, ethanol and distillers’ grains.

Figure 1 tracks Nebraska export values of the leading export commodities from 2000 through 2017. Exports are a growing part of Nebraska’s agricultural revenue over time as the value of Nebraska agricultural exports has increased nearly 3 times since 2000. However, Nebraska exports in 2017, at $6.4 billion, slipped almost $200 million compared to that shipped in 2016. Most of the decline was due to decreased exports of soybeans, down nearly $130 million, and decreased exports of corn, down over $140 million. The slippage can be attributed to the tariff threats made by the Trump Administration against some of Nebraska’s largest customers and competition from other countries. Fortunately increased exports of beef, up $112 million, and pork, up $16 million, partially offset the downturn in corn and soybeans.

The experience of counties in term of changes in export values between 2016 and 2017 varied. Figure 2 shows the gain or loss in export value in counties between the two years. In all 48 counties (colored red) saw a decline in export values year-over-year. These counties are primarily dominated by crop production and rely heavily on soybean and corn exports. The remaining counties (colored green) saw a growth in export value. These counties are dominated by beef production and the growth in beef exports in 2017 helped bring increased revenues to these counties. McPherson County saw the largest year-over-year increase at $6.3 million. The map demonstrates directly how changes in international trade can trickle down and affect the livelihoods of farmers and ranchers and local communities.