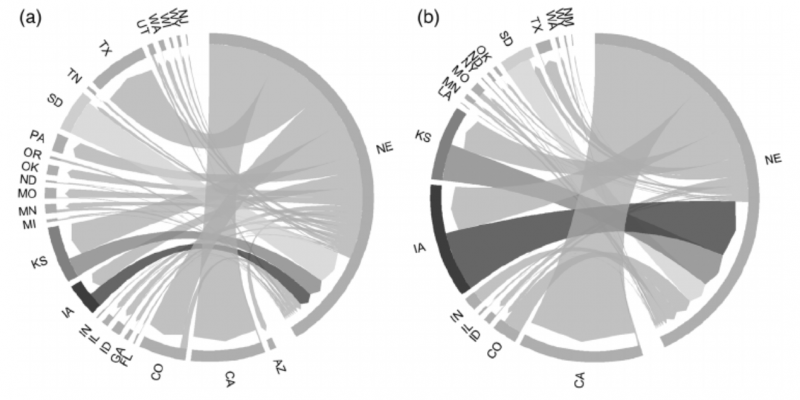 Ninety percent of trade in U.S. agricultural products is domestic, flowing between states. Producers, traders, and agri-businesses know weather can change these cross-border flows. They’ve experienced first-hand the changes in flows of crops, hay, and livestock which occur when drought and floods hit. Three economists at the University of Illinois examined trade flows across state lines and the impacts weather can have in a paper entitled, U.S. Interstate Trade Will Mitigate the Negative Impact of Climate Change on Crop Profit.

According to the paper, Nebraska was among the top states dependent on domestic trade, as either an exporter or importer, along with California, Illinois, Iowa, Indiana, Minnesota, Missouri, and New York. These states are described as “key” players in the interstate trade system. Animal feed is a major driver of domestic crop trade. The largest flows go from large crop producing states to livestock producing states.

To demonstrate how flows will change due to weather, the researchers used trade flows in/out of Nebraska in 2007 and 2012 as examples. Figure 1 shows two diagrams detailing trade flows between Nebraska and its trade partners in 2007 (a) and 2012 (b). Nebraska experienced a severe drought in 2012, but not in 2007. Nebraska exported commodities to 34 states in 2007 with California, Texas, and Colorado being the largest destinations. South Dakota, Kansas, and Iowa shipped the largest amounts into Nebraska. The ratio of exports to imports for the year was 3.29. In other words, Nebraska shipped 3.29 times more out of the state than other states shipped to it.

The Illinois study reinforces what many people in agriculture understand. Free trade between states allows goods to flow and markets to adjust to weather. Production problems in one state can be mitigated by imports from other non-impacted states. Trade among the states, by allowing supplies and markets to adjust efficiently can help blunt Mother Nature’s whims.