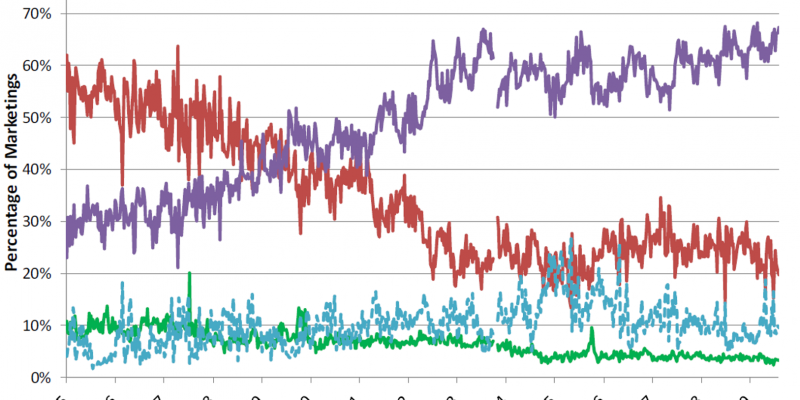 InvestingAnswers defines price discovery as “the act of determining the proper price . . . by studying market supply and demand and other factors. . . [it] also depends on the number, size, location, and competitiveness of the buyers and sellers.” Price discovery in fed cattle markets is a growing concern for many participants.

Negotiated trades have fallen from about 55 percent of total fed cattle purchased in 2008 to around 25 percent today (Figure 1). Thinning cash markets have led to two proposals being offered to address the concerns. One proposal would require packers to purchase at least 50 percent of its weekly slaughter through negotiated purchases. The other would require a minimum of 30 percent of each packer processing plant’s weekly volume to be cash purchases. Both proposals would require cattle to be delivered not more than 14 days after the date of purchase. Presumably the USDA would monitor markets and enforce the requirements.

Negotiated purchases in Nebraska averaged 41 percent of total transactions between 2016-2020 on an annual basis according to the U.S. Cattlemen’s Association. In contrast, cash purchases in the Texas/Oklahoma/New Mexico region accounted for 9 percent. Weekly and monthly data will vary quite a bit around these averages. Negotiated purchases in Nebraska between 2014-2018 accounted for 37 percent of the total U.S. negotiated transactions, according to research by agricultural economists at Kansas State and Iowa State. The researchers also found 85 percent of negotiated purchases nationally were for a 0-14 day delivery and 15 percent were for 15-30 day delivery. Nebraska and Iowa accounted for 63 percent of the deliveries in the 15-30 day window. In his research of fed cattle markets, Dr. Stephen Koontz of Colorado State concluded, “Price discovery in the national fed cattle market displays no problems.” However, cash markets are doing less than half the price discovery they once did. Problems appear at the regional level, particularly in the southern plains. As a result, cash markets in the northern plains, Nebraska, and futures prices are becoming more prevalent in price discovery.

Supporters of a mandate argue requiring a minimum threshold for cash sales would result in increased cash trades, more robust price discovery, more transparency, and a check on market leverage by packers. Opponents argue government mandates are blunt, one-size-fits-all instruments, that often do not fit well in the reality of private markets, particularly when there are regional market differences. Economics would suggest the mandate would create inefficiencies and higher costs. There are economic reasons why non-cash transactions occur. According to Koontz, the use of forward contracts benefits those who use them by $15-$25 per animal and the use of formula arrangements provide benefits of $25-$40 per animal. To the extent a mandate moves trade away from these types of transactions benefits could be lost and increased costs borne by all participants in the system. The impact to cash markets in Nebraska would depend where minimum threshold is set—the higher the threshold the more likely it will impact Nebraska. Limiting deliveries to a 14-day window would have greater impact in Iowa and Nebraska relative to other states.

The concerns over less cash transactions in cattle markets are long-standing. Recent price declines resulting from COVID-19 triggered the recent policy proposals. It should be noted, though, having a mandate in place when the COVID-19 shocks hit the markets would have done little to mitigate the volatile price changes. When a major segment of demand takes a hit, and processing facilities shut down, no transaction mandate can overcome the resultant market shocks.