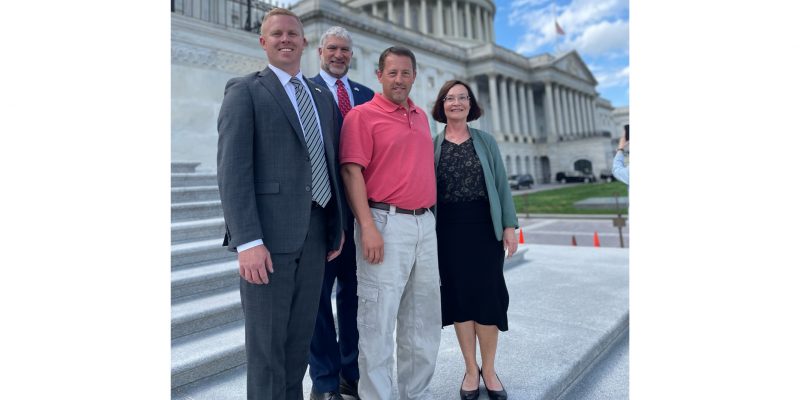 “Farmers and ranchers play a leading role in climate sustainability and are focused on growing the food, fuel, and fiber this country needs, and have not had to worry about regulations intended for Wall Street. Unlike the large corporations currently regulated by the SEC, family farms and ranches don’t have teams of compliance officers,” Mark McHargue, president of Nebraska Farm Bureau said.

The rule extends reporting requirements for public companies to report on Scope 3 emissions, which are the result of activities from assets not owned or controlled by an organization but contribute to its value chain such as farms and ranches.

“This could create burdensome reporting requirements for family farms and ranches selling into supply chains and force the disclosure of private information. And may create multiple new sources of substantial costs and liabilities. These include reporting obligations, technical challenges, significant financial and operational disruption, and the risk of financially crippling legal liabilities. Farmers play a leading role in climate sustainability. It is the job of elected lawmakers, not unelected regulators at the SEC, to adopt policies related to farms and ranches,” McHargue said.

“Over the past several years, NEFB has worked to move cattle market reform legislation through Congress. While no proposal has ever been perfect, we believe the legislation put forward through the tireless work of Sen. Fischer is worthy of our support,” McHargue said.

Another area of concern for Farm Bureau leaders is the reauthorization of the tax code. The Tax Cuts and Jobs Act of 2017 continues to benefit most farm and ranch businesses. Important provisions include maintaining the reduced income tax rates, the new small business income deduction (Sec. 199A), unlimited bonus depreciation, and an increase in the estate tax exemption.

“Unfortunately, many of the important improvements made are set to expire in 2025. Failure to extend important pass-through provisions will result in a tax increase for farmers and ranchers and leave them without ways to deal with the cyclical and unpredictable nature of their businesses. We need to work toward reauthorizing these important pieces of the tax code to provide certainty to farmers and ranchers,” McHargue said.

In the world of agricultural trade, unfortunately there has been little to no significant action taken on many of the largest trade issues important to farmers and ranchers, including ongoing concerns with China, expanding other international marketing opportunities, as well as reforming the World Trade Organization.

“NEFB leaders told the Nebraska congressional delegation that trade is extremely important to Nebraska farmers and ranchers. We need to rejoin the Comprehensive and Progressive Agreement for Trans-Pacific Partnership (CPTPP). China remains a vital market for Nebraska goods as a consistent top three purchaser of Nebraska products, year in and year out. Working on a long-term trade relationship, including the elimination of tariffs, while at the same time holding them accountable for trade, copyright, and national security concerns is vital to the long-term economic and national security success of the US,” McHargue said.

To date, the Biden administration has yet to fill two key agricultural trade positions within the federal government including the Chief Agriculture Negotiator at the Office of the U.S. Trade Representative (USTR) and the Undersecretary for Trade at USDA. While a nominee for the Undersecretary for Trade was recently announced, the administration must move forward to fill these positions as soon as possible. Farm Bureau leaders also stressed the importance of extending Trade Promotions Authority (TPA) since it expired in July 2021.

“NEFB has long supported granting either political party TPA because of our strong support for the expansion of new markets. We would encourage the administration to work with leaders in Congress on a multi-year extension of TPA,” McHargue said.

Those attending the Washington, D.C. Fly-In were: