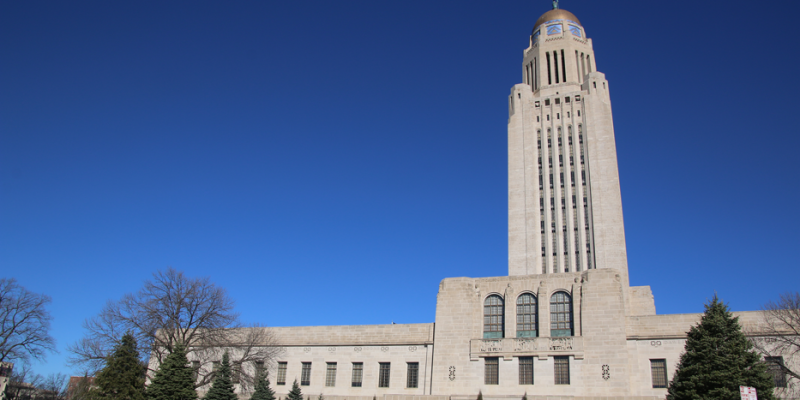 LB 803* – Establishes a state checkoff program for pulse crops like dry peas, lentils, chickpeas or garbanzo beans, faba beans, and lupine. Creates a checkoff board and sets an initial check off rate of 1% of the net market value of pulse crops sold.
(Hughes) (Select File) SUPPORT.

LB 791* – Clarifies that if a person is convicted of livestock abuse or neglect and is sentenced, a court may also order that the person be prohibited from owning or possessing other non-livestock animals.
(Slama) (In Committee) NEUTRAL.

LB 1165 – Eliminates the Nebraska Brand Committee and authorizes the Nebraska Department of Agriculture to carry out provisions of the Livestock Brand Act.
(Stinner) (In Committee) OPPOSE.

LB 1200 – Replaces the Nebraska Brand Act with the Livestock Identification Act. Updates statute to recognize electronic animal identification. Sets in statute certain fees for registration, as well as annual renewal fee for registered feedlots and allows each “grow yard” affiliated with a feedlot within the inspection area to be registered via an annual $50 fee, plus an audit requirement.
(Brewer) (In Committee) SUPPORT.

LB 919 – Clarifies that applications to the Nebraska Department of Agriculture to cultivate, process, or broker industrial hemp can only be denied if applications are incomplete or deficient.
(Wayne) (In Committee) SUPPORT.

LB 1219 – Provides consumer protections and regulations for CBD and other hemp products.
(Wayne) (In Committee) NEUTRAL.

LB 1026 – Allocates $2.5 million of state money to the Daugherty Water for Food Global Institute at the University of Nebraska to support ag water research best practices.
(Bolz) (In Committee) SUPPORT.

LB 1073* – Allocates more state dollars to education to reduce property taxes. Lowers the value of agricultural land to 55% of its actual value within the TEEOSA (state aid to schools’ formula). Lowers the local effort rate from one dollar to ninety-nine cents. Establishes basic funding aid. Each school district would receive 7.5% of its basic funding from the state.
(DeBoer) (In Committee) SUPPORT.

LR 279CA* – Constitutional amendment allowing the Legislature to establish up to 55 legislative districts. There are 49 today with a cap of 50.
(Scheer) (General File) SUPPORT.

LR 280CA – Constitutional amendment allowing senators to serve up to three consecutive terms in the legislature.
(Wayne) (In Committee) SUPPORT.

LB 1174 – Targeted to help those expanding their livestock farms, the bill adds certain licenses under the State Electrical Act to address a restrictive licensing requirement which dramatically increases costs without enhancing the safety or structural integrity of livestock and other buildings.
(Briese) (In Committee) SUPPORT.

LB 857 – Mandates state agencies review rules and regulations 10 years after they were enacted. Each agency would be required to file a report stating the statutory authority for the rule or regulation as well as whether it’s working or in need of revision.
(Lowe) (In Committee) SUPPORT.

LB 1057 – Enacts limitations on the appeal of local zoning decisions made by a planning commission or county board regarding denials of conditional use or special exemption permits.
(Lowe) (In Committee) OPPOSE.

LB 802 – Codifies common law in statute clarifying that the right to use groundwater cannot be separated from the overlying land.
(Hughes) (In Committee) SUPPORT.

LB 845 – Allows for the separation of water rights from overlying land in cases where the land was purchased to develop and operate a water augmentation project for streamflow enhancement.
(Groene) (In Committee) OPPOSE.

LB 859 – Changes Game and Parks Commission membership by requiring at least three members be “engaged in farming or livestock production” as compared to three members being “engaged in agricultural pursuits” as is current law.
(Hughes) (In Committee) SUPPORT.

LB 863 – Prevents the Game and Parks Commission from purchasing or acquiring title to any additional land if such purchase or acquisition would increase the amount of property owned by the Commission beginning Sept. 1, 2020.
(Hughes) (In Committee) SUPPORT.

LB 1173 – Allows landowners and lessees to apply for limited transferable permits to hunt antelope, deer, or elk whenever it is evidenced that the animals are doing damage to the landowner’s property.
(Erdman) (In Committee) SUPPORT.

LB 1132 – Eliminates the 25 kilowatt cap on net metering for customer-generators of electricity.
(Wayne) (In Committee) SUPPORT.

LB 930* – Requires that at a minimum, $275 million be available to provide property tax relief each year out of the Property Tax Credit Cash Fund.
(Briese) (In Committee) SUPPORT.

LB 1175 – Enacts a tax on mechanical amusement devices whereby proceeds from the tax would be allocated to the state’s Property Tax Credit Cash Fund.
(Briese) (In Committee) SUPPORT.

LB 1212 – Adopts the Property Tax Request Act, that expands on LB 103 adopted last year which forces down levies proportionate to increases in property valuations. Expands requirements of public notice and hearings on tax asking increases.
(B. Hansen) (In Committee) SUPPORT.

LB 1213 – Lowers property valuations. Eliminates TEEOSA (state aid to schools’ formula) and replaces it with per-pupil foundation aid and “infrastructure aid”. Broadens the sales tax base by eliminating sales tax exemptions (including those on ag machinery and equipment) to lower property taxes and reduce individual income tax rates.
(B. Hansen) (In Committee) NEUTRAL.

LB 818 – Indexes the nameplate capacity tax paid by renewable energy generators in lieu of real property tax and personal property tax to the consumer price index so the tax can change with inflation.
(Brewer) (In Committee) SUPPORT.

LB 829 – Requires the Game and Parks Commission to pay in-lieu of taxes on all private land purchased by the Commission. Payments shall be the same as the real property taxes if paid by a private landowner and be valued at its highest and best use.
(Erdman) (In Committee) CONDITIONAL SUPPORT.

LB 1084 – Adopts the Nebraska Transformational Project Act and creates the Nebraska Transformational Project Fund. Allows the University of Nebraska Medical Center to apply for $300 million of state matching funds for a new facility. Depending on how fast the federal government makes up its mind if this facility will be built in Nebraska, the state’s share could be needed as early as 2021 and would likely be payable over a period of 5-6 years.
(Kolterman) (In Committee) MONITOR.

LB 1214 – Adopts the Rural Economic Development Grant Fund to provide grants to rural businesses which would not qualify for business incentives under the “ImagiNE” Act.
(Friesen) (In Committee) SUPPORT.

LB 931* – Clarifies parameters of Nebraska’s overweight harvest permit exemption for farmers. The bill specifically states the exemption from having to obtain an overweight permit would apply to the hauling of commodities from “storage” to market. Committee amendment pending.
(Halloran) (Select File) SUPPORT.

Statement by Steve Nelson, Regarding Announcement of Year-Round E-15