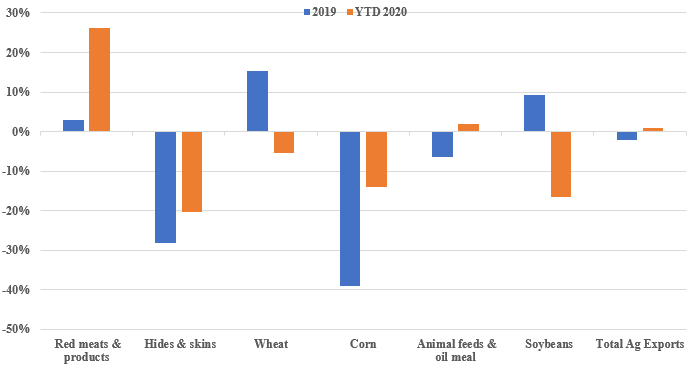 U.S. exports of beef and pork are surging in 2020 but exports of other Nebraska-produced commodities are not faring as well. Nebraska’s top export commodities include soybeans, corn, beef, animal feeds (ddgs), pork, and hides and skins.

U.S. agricultural exports overall in the first quarter were slightly higher compared to last year, led by exports of red meats, up 26 percent. The U.S. Meat Export Federation reports the value of pork exports through March this year are up 52 percent. Strong demand from China as well as Mexico, Japan, and Canada are the drivers. Pork exports to China alone were up a staggering 321 percent in the first quarter. The value of first quarter beef exports was also higher, up 8 percent. Increased trade with Japan, up 16 percent, is leading the way. Reduced Japanese tariffs resulting from the U.S.-Japan trade agreement have helped U.S. beef products regain a foothold in this market. South Korea, Mexico, and Canada, countries with which the U.S. has free trade agreements, also continue to increase their purchases of U.S. beef.

Otherwise, exports of other commodities produced in Nebraska are off to a tough start in 2020. Exports of hides and skins, wheat, corn, and soybeans are lower relative to last year. Soybean exports are down 16 percent, and corn exports down 14 percent. U.S. corn faces tough competition in international markets from Brazil, Argentina, and Ukraine, yet the USDA projects U.S. corn exports to improve by year’s end. The USDA also expects soybean exports to pick up later this year due to Chinese purchases. China has been buying Brazilian soybeans, but the depletion of Brazilian stocks should lead to greater purchases from the U.S. Competition for the Chinese business will remain fierce, though, due to the value of the dollar relative to competitors’ currencies.

Statement by Steve Nelson, President, Regarding Announcement of Stabilization Grants for Livestock Producers