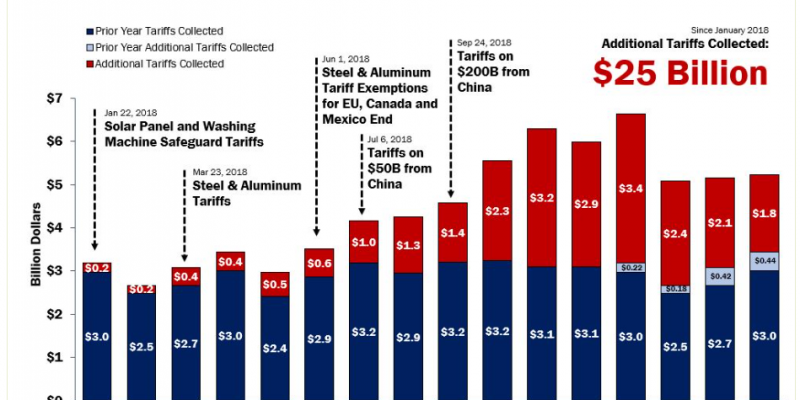 The tariff is paid by importers; however, the ultimate payer of the tax depends on domestic and international market conditions and the buyers and sellers involved in the trade. The tax can be passed along to consumers through higher prices, it could be absorbed by importers, or it could be borne by exporters through lower prices. With the recent spurt of tariffs imposed by the U.S., economic analysis has shown the cost of the tariff has been largely borne by consumers through higher prices. For example, economists found the tariffs on washing machines has increased the average price per machine by $86.

The increased tariffs have resulted in greater revenues for the U.S. government. However, an analysis by John Newton, an economist with American Farm Bureau, shows that even with the increased revenues from the Trump tariffs, tariff revenues do not equal the “hundreds of billions” claimed by the President. The graphic below, created by Newton, documents the increases in tariff revenue since January 2018. Newton calculated the federal government has collected an additional $25 billion in tariff revenue since January 2018 when higher tariffs were first imposed. Additional tariffs on Chinese goods are likely to continue for the foreseeable future. President Trump has also threatened higher tariffs on imports of goods from Mexico. It seems, then, the increased tariff revenues flowing into the federal government coffers will continue, as well as the higher prices paid by consumers.