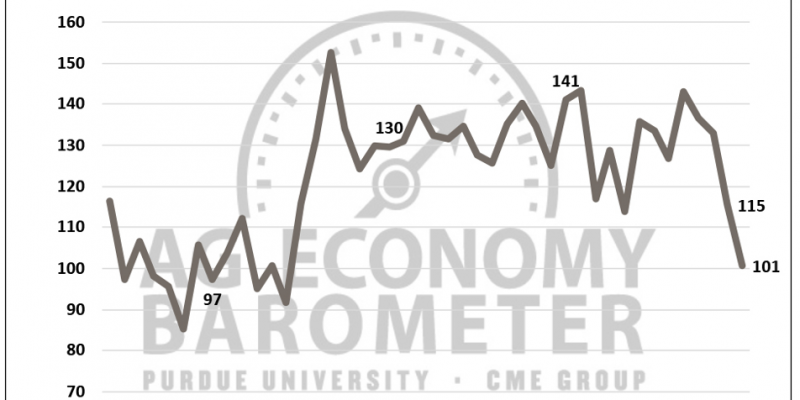 Agriculture producers’ sentiment regarding the agricultural economy as measured by the Purdue University/CME Group Ag Economy Barometer plummeted over the past two months. The latest nationwide survey of 400 agricultural producers yielded a barometer reading of 101, 14 points below the previous month and the lowest reading since October 2016, the month before the election of President Trump.

The latest survey was taken in mid-May in the midst of the prolonged planting season but before the announcements of diaster assistance payments, trade payments, or the threat of additional tariffs on Mexican goods. Producers’ sentiments worsened for both current economic conditions (12 months into future) and future conditions (5 years into future). The index of current conditions registered at 84, nearly the lowest level since the barometer was launched in the fall of 2015. The index of future expectations fell to 108. The index compares producers’ current sentiments on the economy realtive to October 2015. Readings above 100 indicate producers are more positive relative to October 2015.

Readings below 100 mean they are less positive. The survey also showed international trade and trade disputes remain a concern for producers, but a majority of those surveyed (65 percent) indicated they still expect the trade dispute with China to be resolved in a way which benefits U.S. agriculture. However, that figure was down from 12 percent compared to responses to the same question in the March survey.