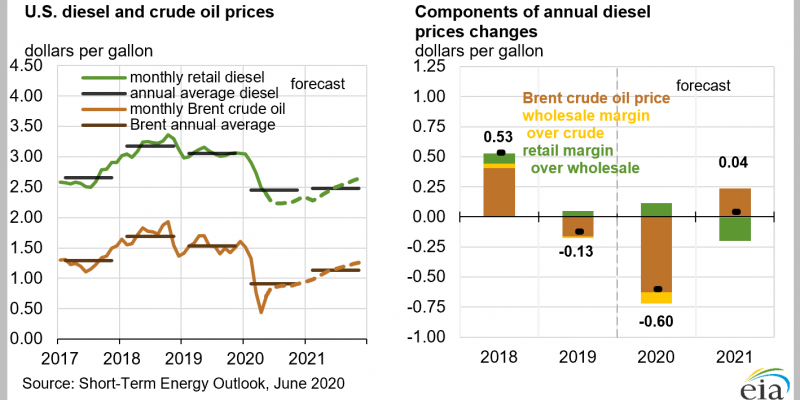 Farmers and ranchers use fuel in producing crops and livestock so fuel is an important expense, but fuel prices also factor into the profitability of ethanol production and, in turn, corn producers. Livestock producers, because of their usage of distillers’ grains, can also be impacted by changes in fuel prices through ethanol production.

As such, COVID-19 impacts on energy prices have been a bit of a mixed bag for producers. The plunge in oil prices meant lower fuel prices (Figure 1). Lower diesel prices, the lowest since 2017, have reduced fuel costs for producers. On the other hand, lower fuel prices hurt ethanol profitability resulting in the shutdown of facilities. The shutdowns hurt the demand for corn and left livestock producers scrambling for alternatives to distillers’ grains.

Like the slowdowns which occurred in the ethanol sector, the plunge in fuel prices resulted in oil refineries ratcheting down production along with a few operations ceasing production. Bloomberg News reported refiners processed the least amount of oil since 2011, down some 3.5 million barrels from year end levels. The slowdown in refining resulted in a flotilla of oil tankers off the coast of California waiting to offload oil. CBS News reported in early May there were 27 tankers parked off the Los Angeles port waiting to offload. Normally there are only 3-5 tankers waiting.

The U.S. Energy Information Administration (EIA) estimates the consumption of liquid fuels in the US for the second quarter, April-June, will be down 23 percent from the same period in 2019. The EIA also projects demand will rise slowly over the next 18 months as the economy improves and people begin to venture out. Retail diesel prices are expected to slowly rise with increased demand. However, some industry observers are concerned that too quick a ramp up in demand could lead to gasoline shortages, much like what occurred when consumers coveted toilet paper. Refineries cannot be turned off/on with a switch. It takes time for the facilities to scale up production. If gasoline and diesel fuel consumption grow too quickly, the increases could outpace refining capacity resulting in shortages and volatile prices.

In its forecasts the EIA states, “this forecast remains subject to heightened levels of uncertainty because mitigation and reopening efforts related to the 2019 novel coronavirus disease.” In other words, stay tuned. The economy remains uncertain and more disruptions and price volatility could be forthcoming. Crop and livestock producers should monitor developments in fuel markets closely and plan accordingly.

Keeping the Nebraska Farm/Ranch Profitable in 2020

COVID-19 Could Pack a $3.7 Billion Hit to Agriculture