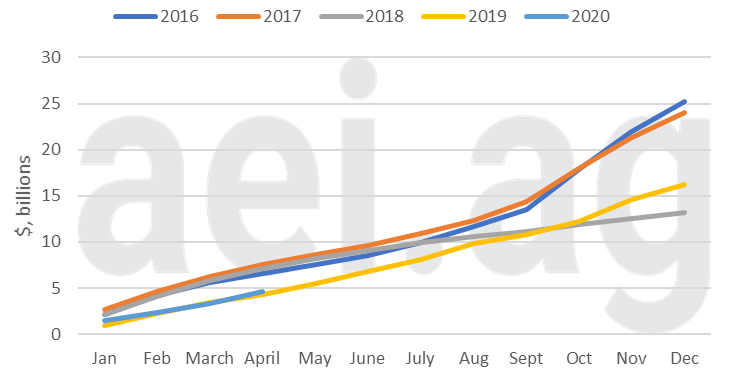 With much fanfare, the U.S. and China entered into a Phase 1 trade agreement earlier this year whereby China agreed to purchase, on average, $40 billion of U.S. agricultural goods per year in 2020 and 2021.

How is China doing thus far under the agreement? Agricultural economist David Widmar addressed the question in recent Agricultural Economic Insights blog. Figure 1, created by Widmar using USDA data, plots China’s cumulative monthly purchases of U.S. agricultural products for 2016-2019 along with purchases through April of this year. China’s purchases this year, $4.6 billion, are at similar levels seen last year, but are below the pace set in 2017 of $7.1 billion.

U.S. exports of soybeans typically account for the greatest share of U.S. sales to China. Widmar says prior to the trade war, soybean exports accounted for 51 percent of agricultural exports to China. According to Widmar, soybean sales to China this year are the lowest in five years. However, China typically purchases most of its U.S. soybeans between October-December, amounting to 57 percent of their purchases. So, a surge in Chinese soybean purchases is still possible. China is also a large purchaser of pork. Here, 2020 has been more promising. The U.S. Meat Export Federation reports that through April, pork exports to China have increased 310 percent, or $993 million.

Chinese purchases of U.S. agricultural products under the Phase 1 agreement have been slow out of the starting gate. Chinese purchases need to escalate mightily over the rest of the year to meet the levels set in the agreement. Tensions between the two countries, though, may make such increases difficult.